Our first stop, of 30 this winter, was 255 miles away at Pershing State Park where we had reserved site 11, electric only. Site 11 isn’t an easy one to get into but we managed. Our power pedestal had an issue so soon we had some maintenance folks working on it. Once they got that fixed we still had electrical issues, our rig became energized, shocking, to say the least. Dave has traced the problem down to the AC, some kind of relay is fried. As soon as we can find a place to ship the board to we should be all good. Thankfully we don’t need it as we are heading toward higher elevations and cooler temps. We’ll be looking for an Amazon locker somewhere, hopefully in Fort Collins.

Contrary to what we had read there is no Verizon signal, only extended 1x, but it worked well enough for a couple of nights. We enjoyed sleeping with the windows for the first time in weeks. The roads are tight and I wouldn’t want to be here with a larger rig.

Pershing State Park was built to honor Gen. John J. Pershing, commanding general of the American Expeditionary Forces during World War I. Nearby is his boyhood which we didn’t visit.

Our full day there we walked the Locust Creek Boardwalk trail, while we didn’t see any wildlife it was a nice walk in the shade. 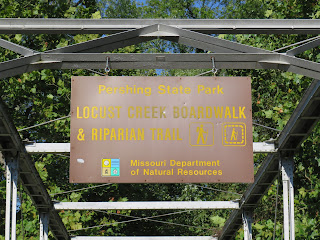 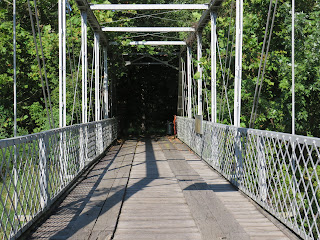 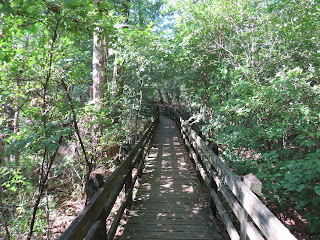 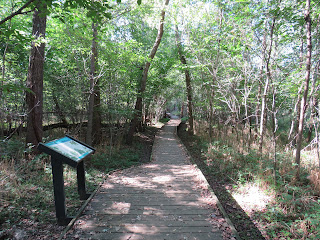 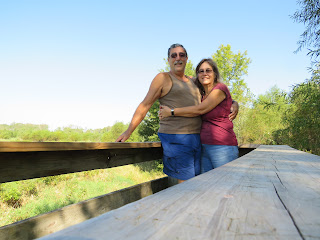 We also took a ride to see Locust Creek Covered Bridge State Historic Park, as former residents of VT where they have about 100 covered bridge-many of which we saw in our 20 years there. Locust Creek was part of Route 8, America's first transcontinental road. US Highway 36 eventually replaces Route 8. 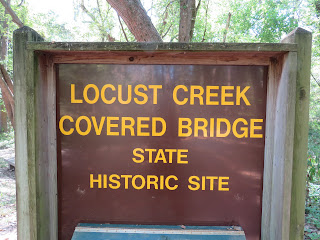 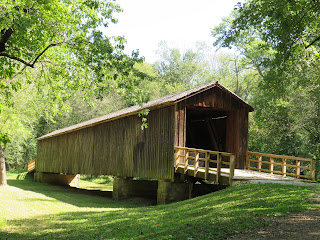 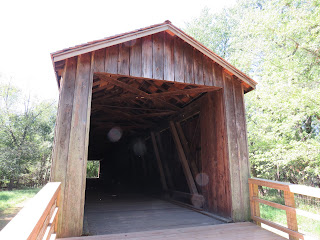 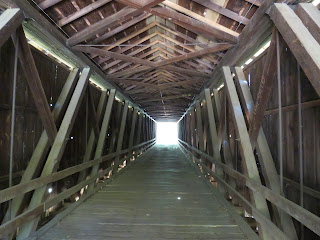 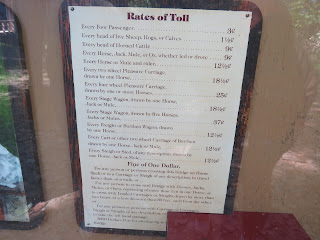 Another 318 miles brought us to our second stop, Mormon Island State Recreation Area, right off of I80 with a small lake between us and the interstate.  Site 65, electric-only, backed up to the small lake, decent spacing between the sites, if you can ignore the interstate noise it's a nice park, big enough to get a decent walk with a small trail system. There are some first come first serve sites, the sites in the open are big enough for most rigs, the ones in the shade not so much. The park's name is derived from the Mormons who used to winter here on their way westward. 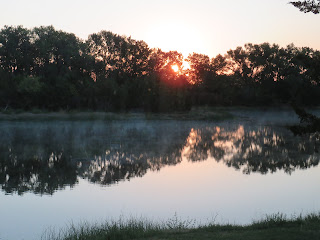 On Saturday we headed into Grand Island in search of beer and groceries. We enjoyed appetizers at Kinkaider Brewing and Dave enjoyed a flight of beer and a couple of samples, I enjoyed their root beer. 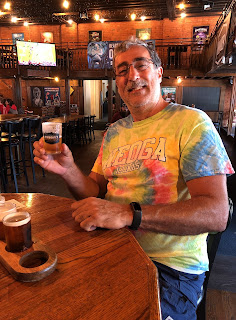 There were some trails in the campground where we could get in a walk. Of course, there's always a geocache or two to find. 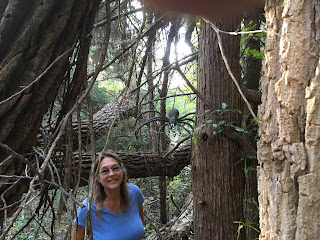 253 miles on Sunday brought us to our third stop, Sidney NE and Cabela's RV Park and Campground, where we have an FHU site for 2 nights. Our ride was just fine except for the drunk, or who knows what, truck driver. Dave noticed him in the drivers' side mirror weaving all over the road, we then entered a construction zone where it was one lane with oncoming vehicles in the other lane. We both kept watch out of side mirrors and I would see him just about take traffic signs and almost go off the road, Dave watched him take out traffic barrels and almost go into the oncoming traffics lane. We finally got out of the construction zone and he fell way back. Soon though he was barreling down behind us and going to pass us, Dave headed for the shoulder, though we could have gone up the exit ramp if we needed. We continued to watch him barrel down the road weaving all over around the other semi-trucks. Thankfully we only had 20 miles left of our ride and never came upon an accident.

On our free day in Sidney we decided to take a ride, Scott's Bluff National Monument was our destination. Before we got there though we made a stop at Chimney Rock.

This area is steeped in westward expansion history, many of the trails including the Pony Express traveled through this area. The Chimney Rock formation served as a landmark for pioneers migrating west. 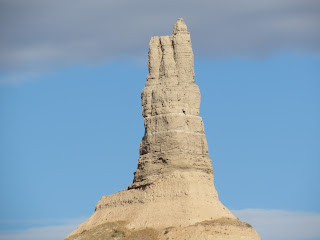 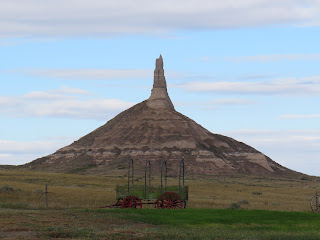 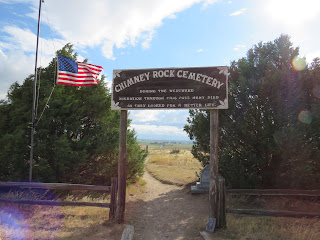 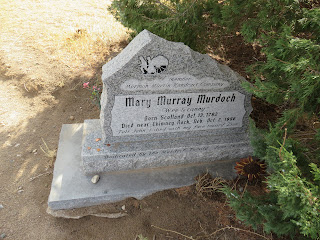 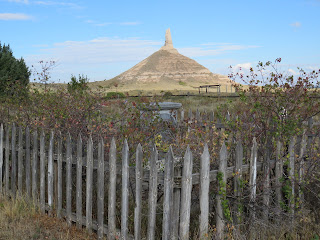 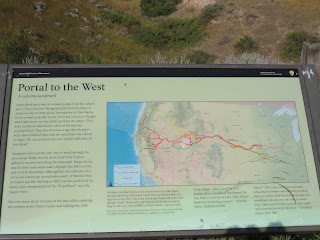 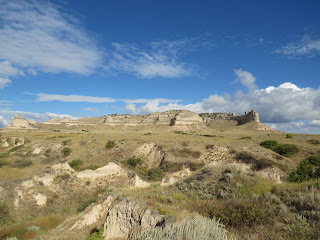 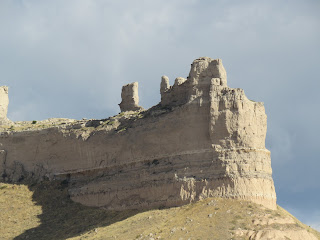 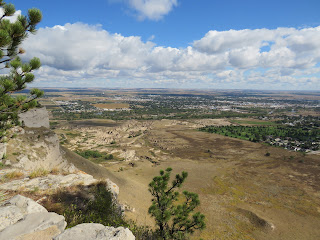 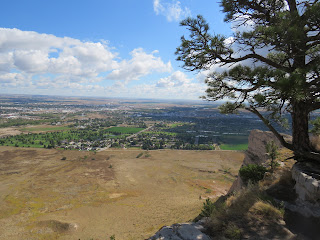 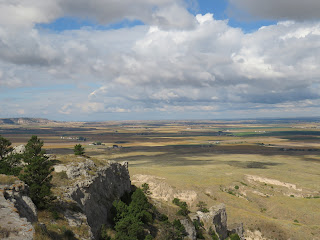 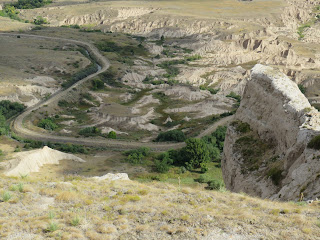 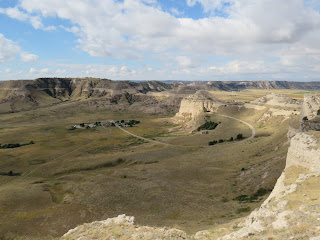 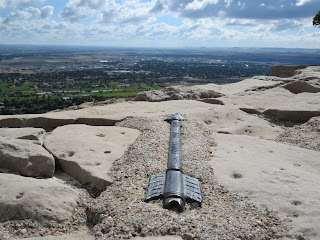 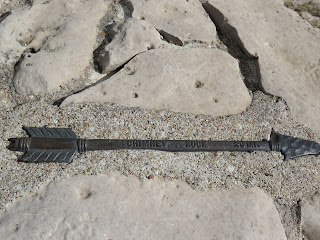 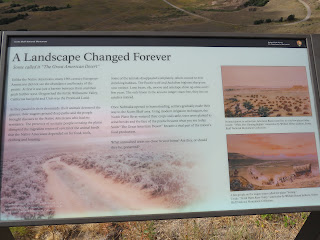 It never ceases to amaze me the grit, fortitude, and determination the early pioneers must have had. To cross a continent in wagons pulled by oxen, the countless miles they walked every day, the dangers they faced on all fronts.
Tomorrow we head to Ft Collins CO, we'll be at Horsetooth Reservoir for 2 weeks. Hiking, and breweries but best of all, family and friends to see.
Until next time...
Posted by Faye N Dave at 5:10 PM