While it was a less than stellar departure we did manage to get the wheels rolling by 8:30 for a six plus hour of driving, it always takes so long to get out of VT. With detours and a few quick stops we arrived at Verona Beach State Park by 3pm. Verona Beach State Park is less then 10 miles north of I-90 (exit 34) on the eastern shores of Lake Oneida, the park opened in 1947 with campsites being added in 1970 and more in 1995. There are 45 sites but only 12 have electric, the sites along the shoreline have no services but will fit smaller rigs, we opted for site 17 with electric, we can see the lake from our site. Our site happens to have no tree cover, not a bad thing when acorns are falling all day and night. 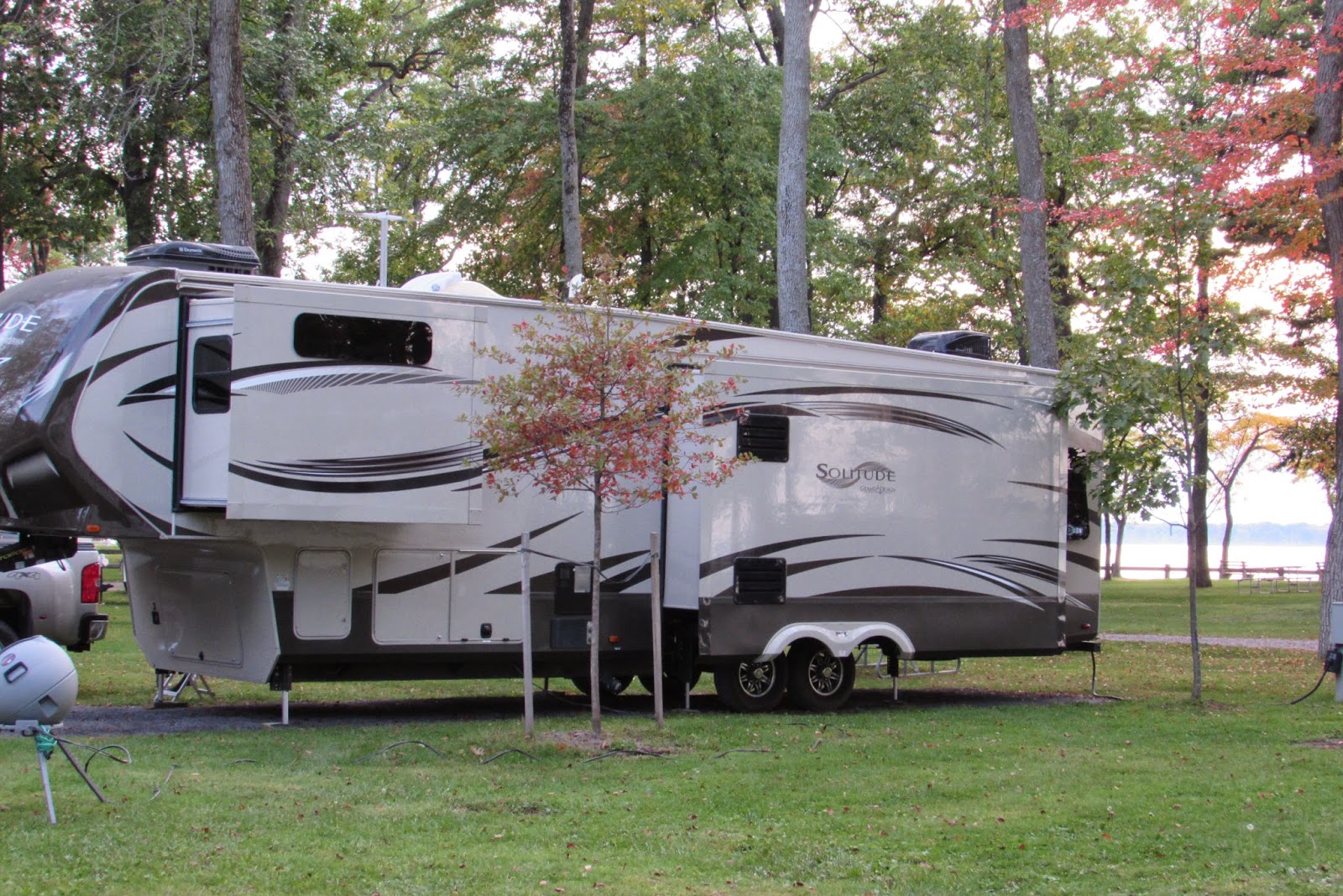 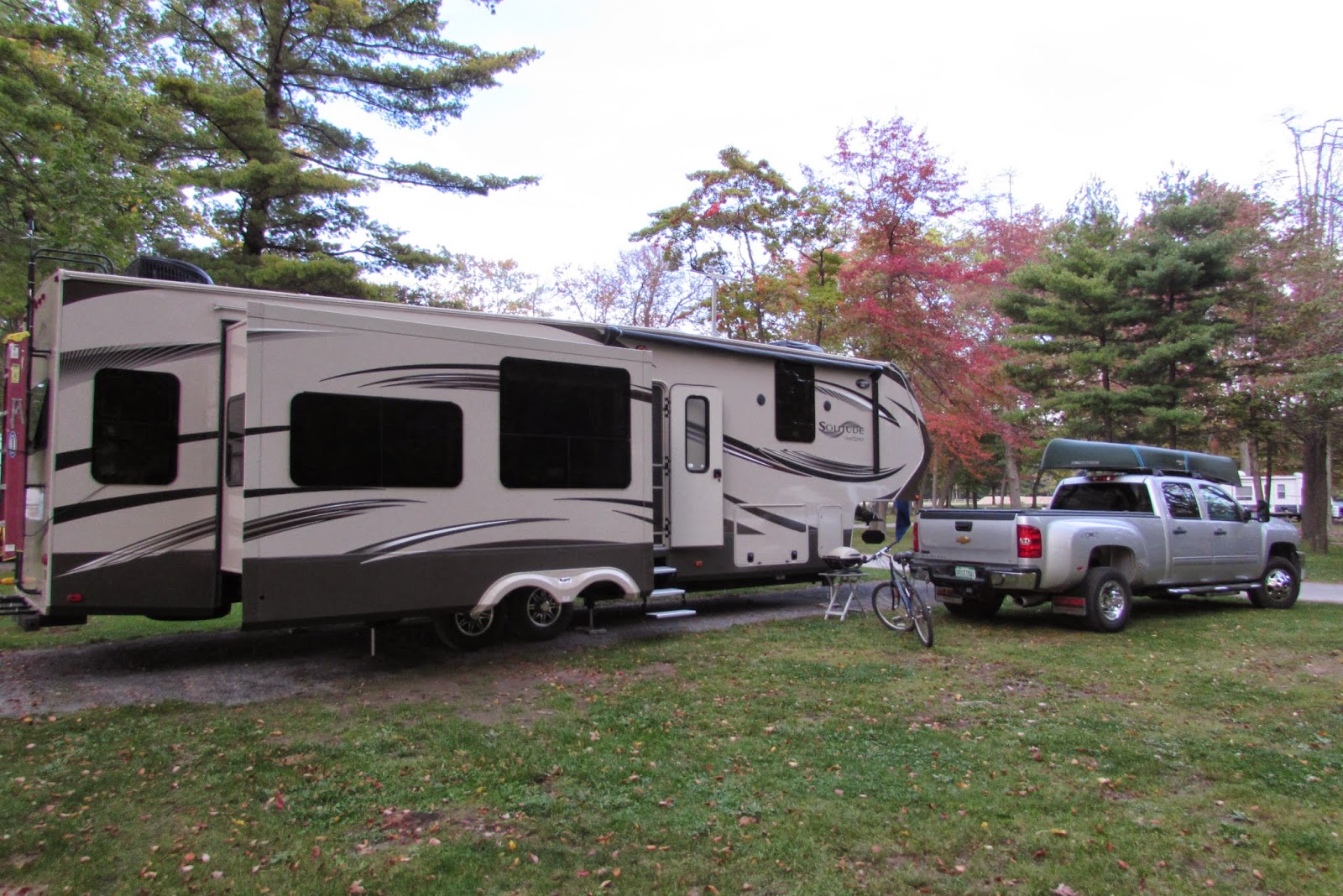 After a long drive we enjoyed a walk along the lake while the sun was setting, a great way to finish the day. 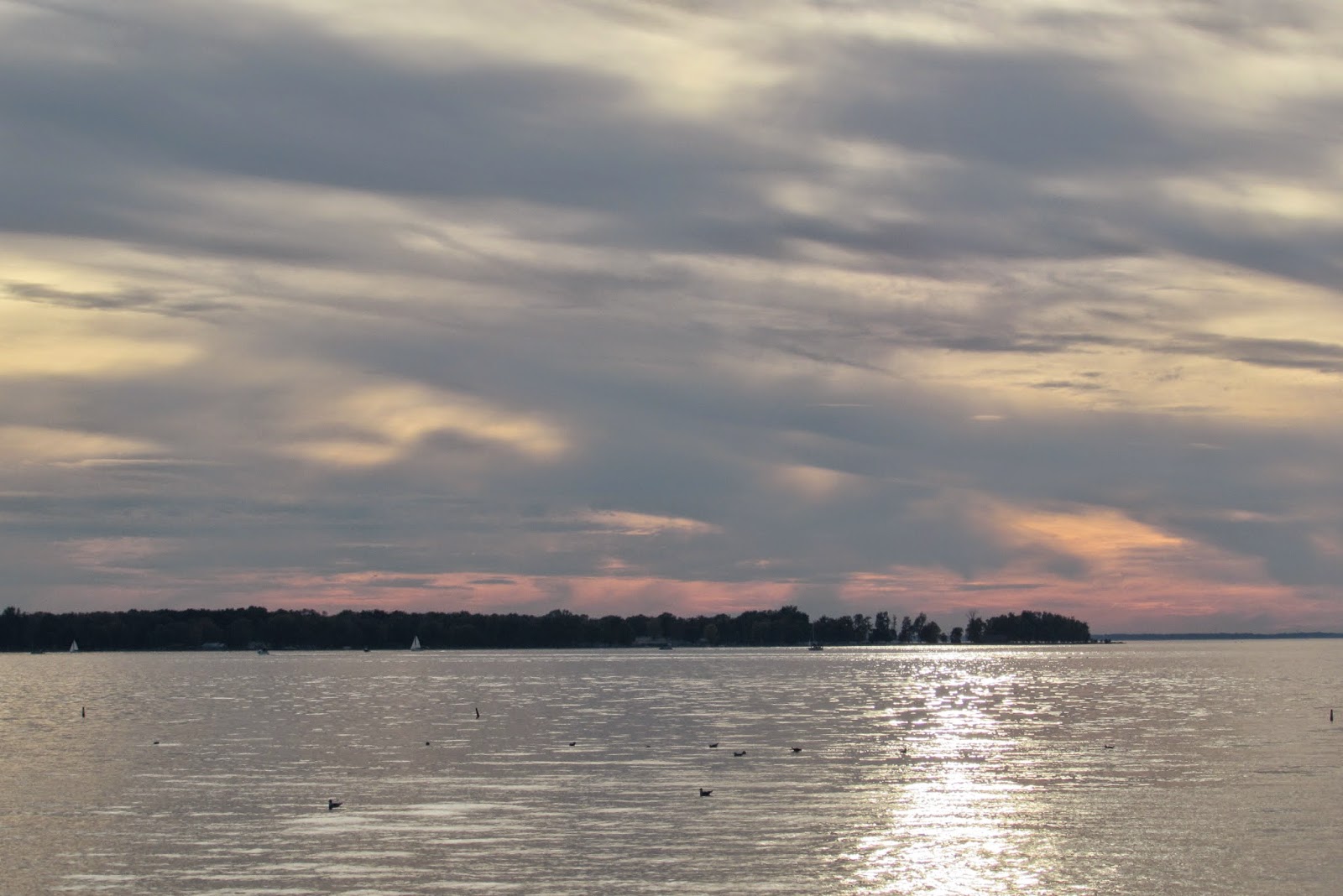 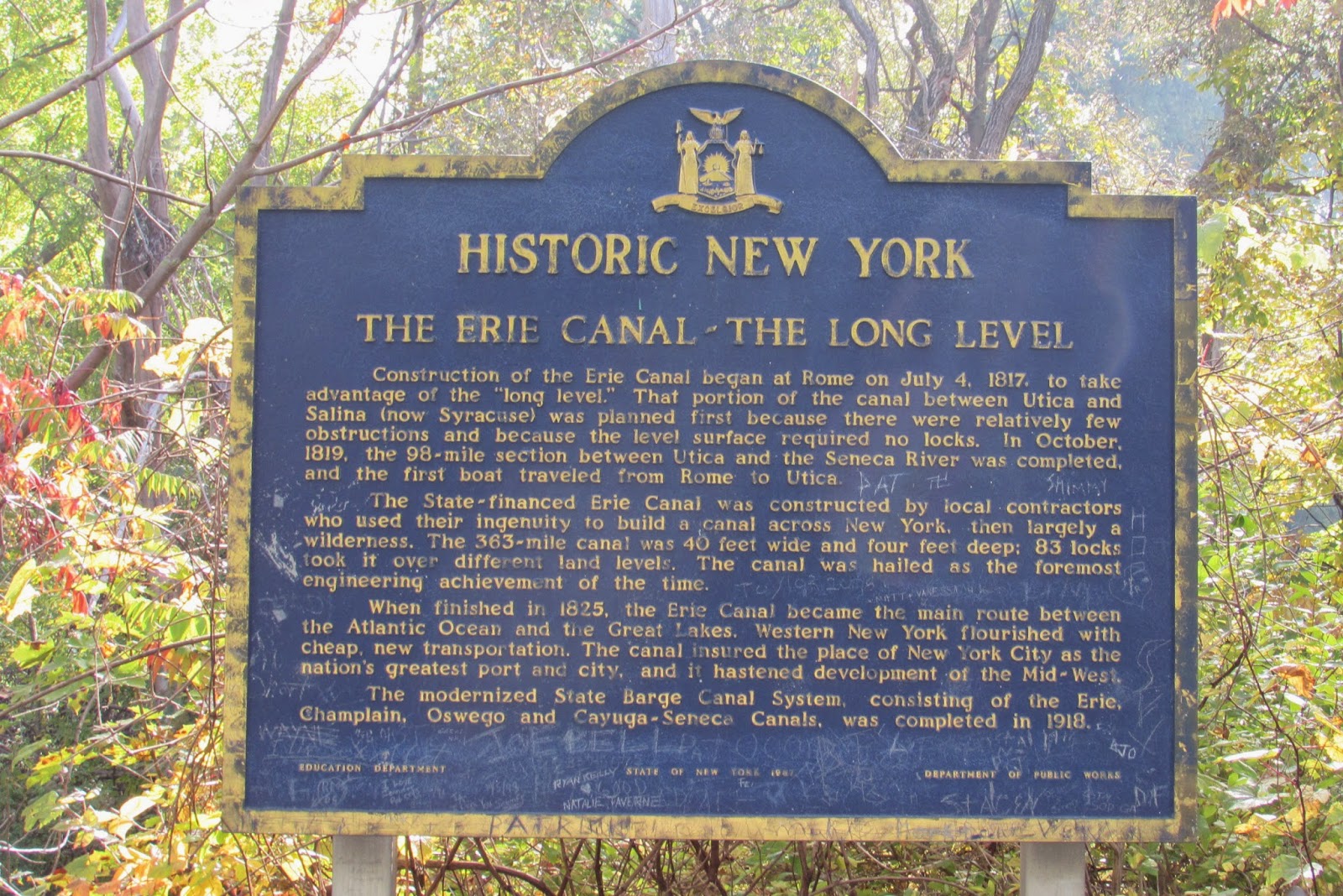 One of the reasons we chose Verona Beach aside from it being at the max we like to drive in a day, there is also the Erie Canal State Park nearby with a biking path on the old towpath. Four miles away is a parking area, we arrived at the towpath 10'sh and decided to head north. For much of the first part  NY 46 was running parallel to the Erie Canalway Trail, while not busy there was somecar noise. 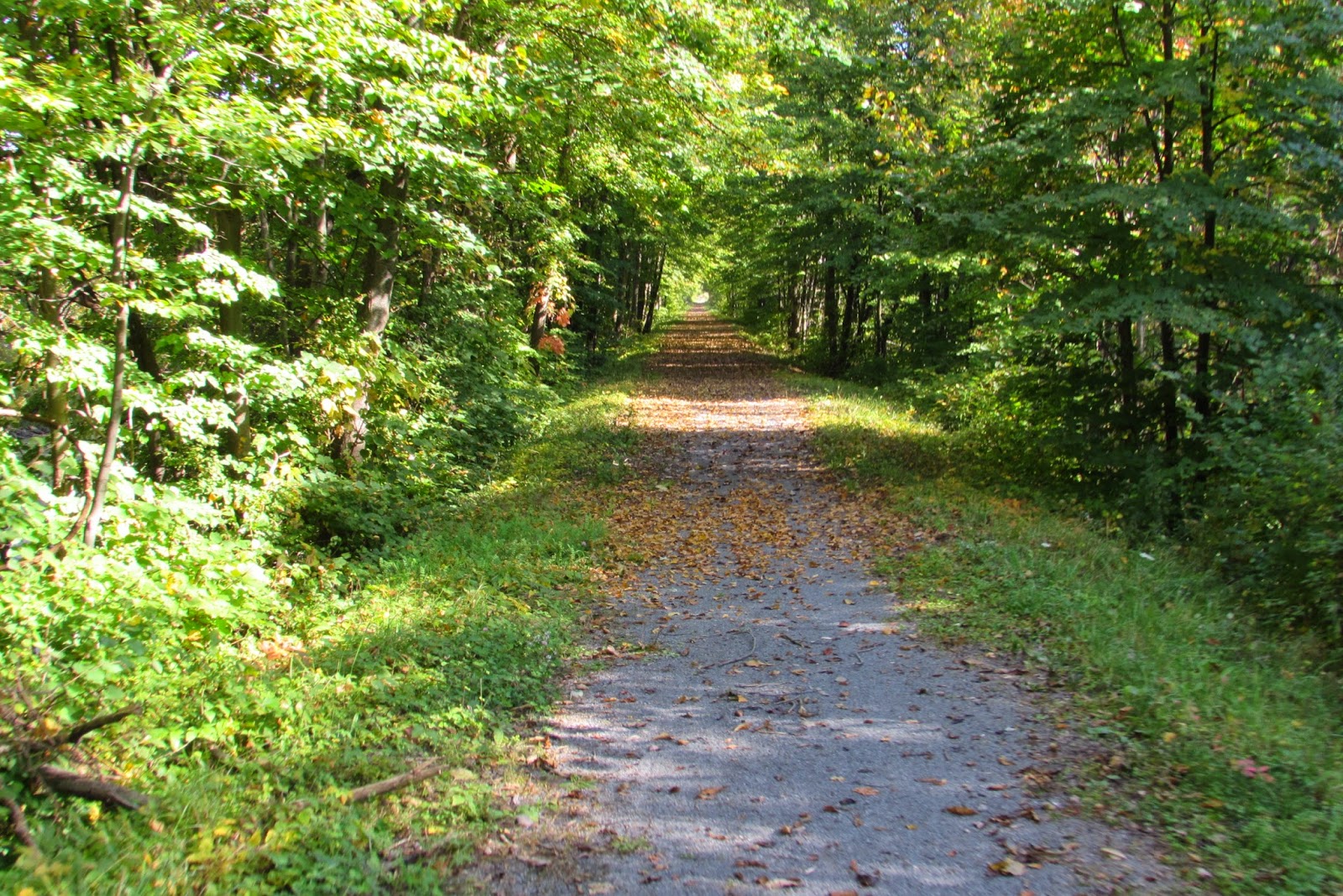 This part of the towpath runs through farm country, the trail in this area had an old smaller unused canal that didn't have much water, what water was there was green and very stagnant (skeeter breeder area) and at some points there was no water just some nasty looking muck. 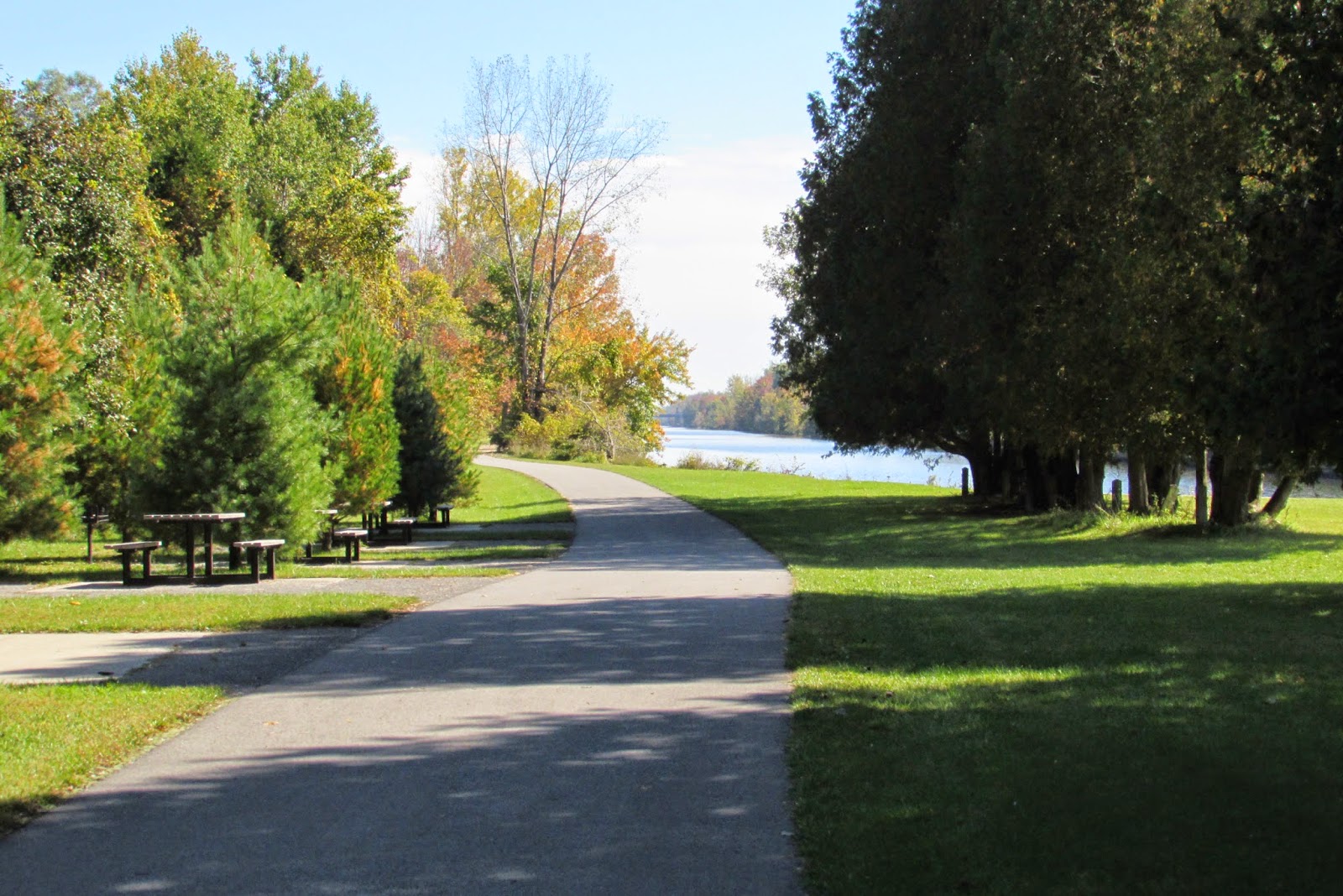 After a while the bike path took us over to the Erie Canal at Lock 21, we continued on and eventually the trail separated from the canal and we rode along what appeared to be an old rail bed. 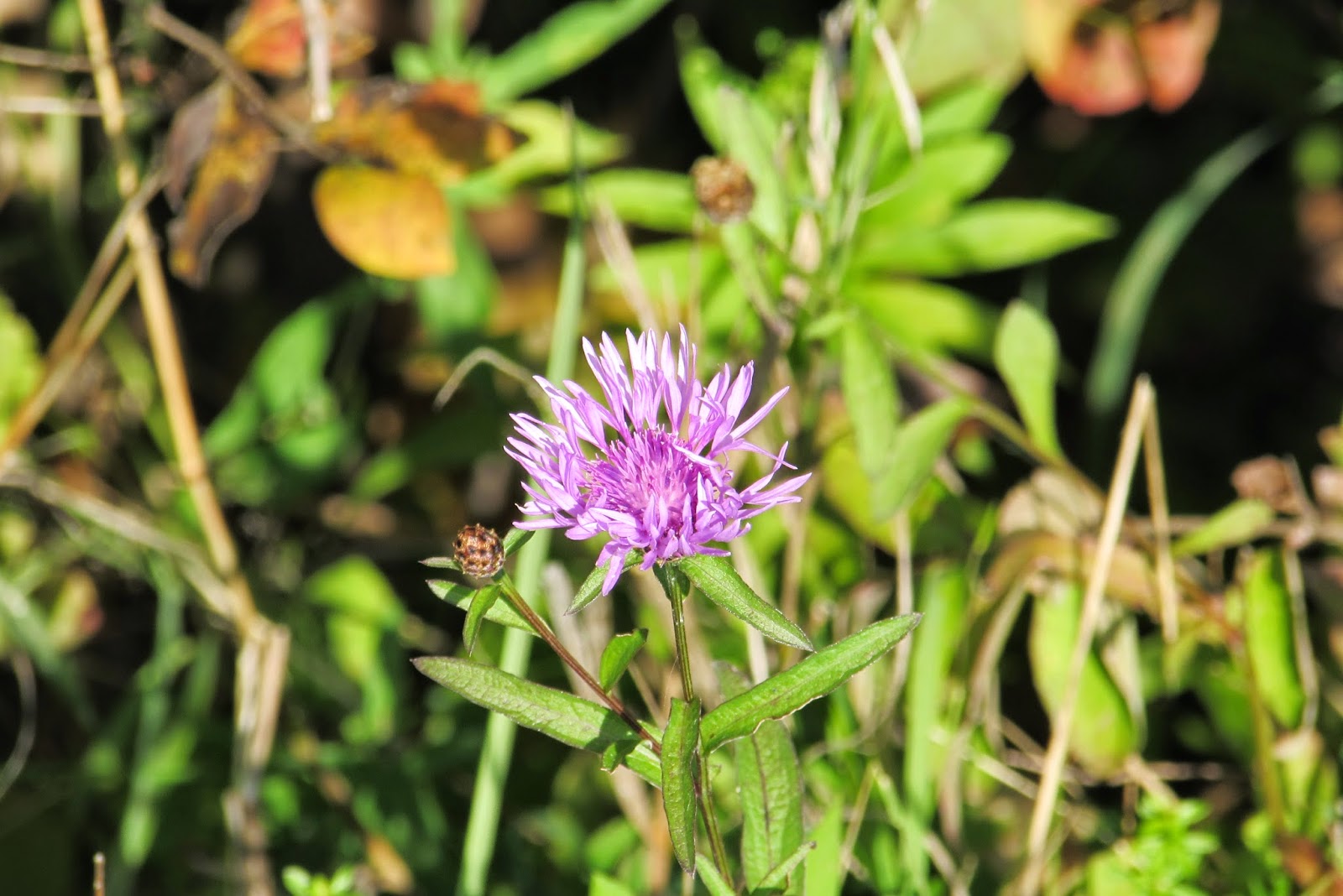 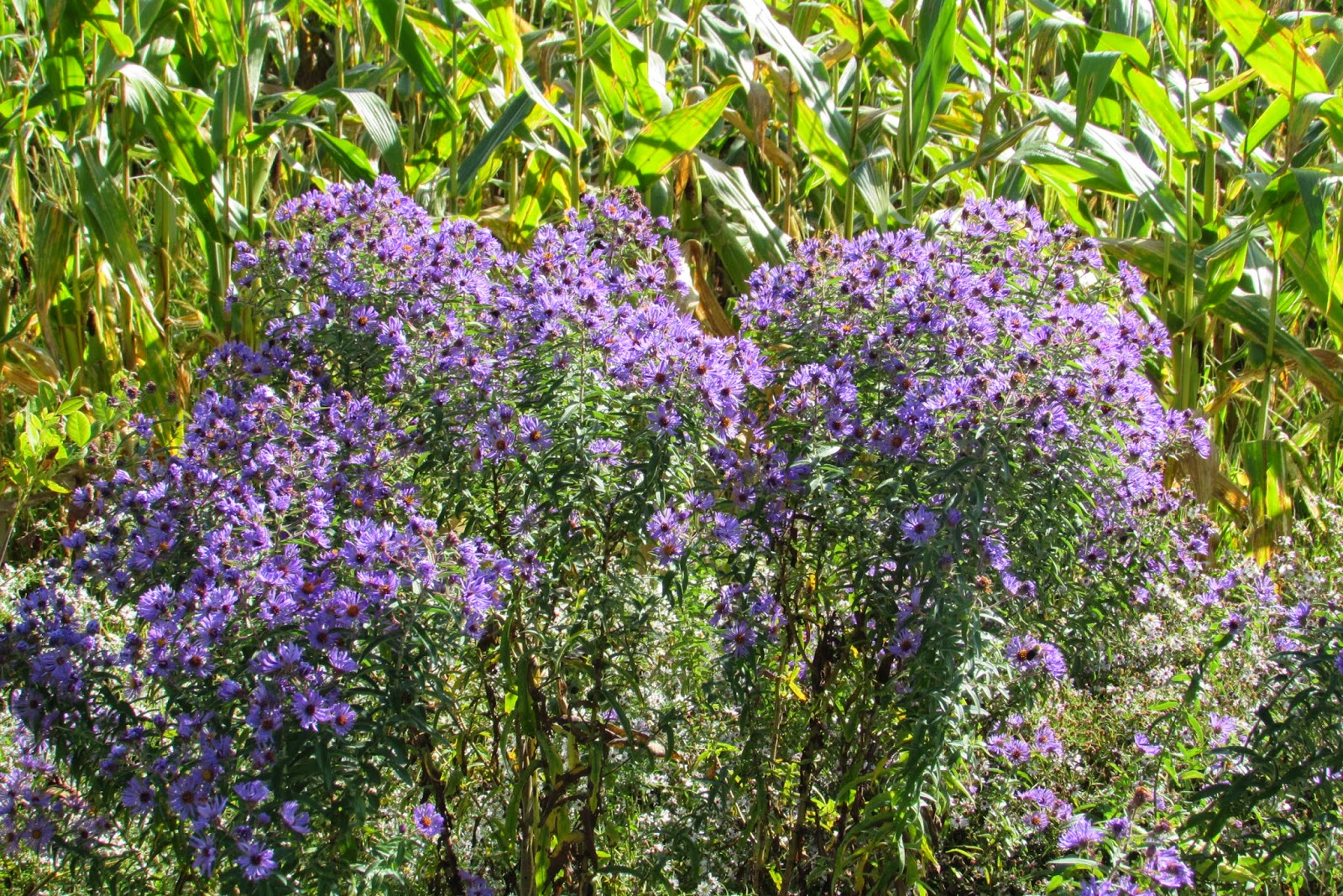 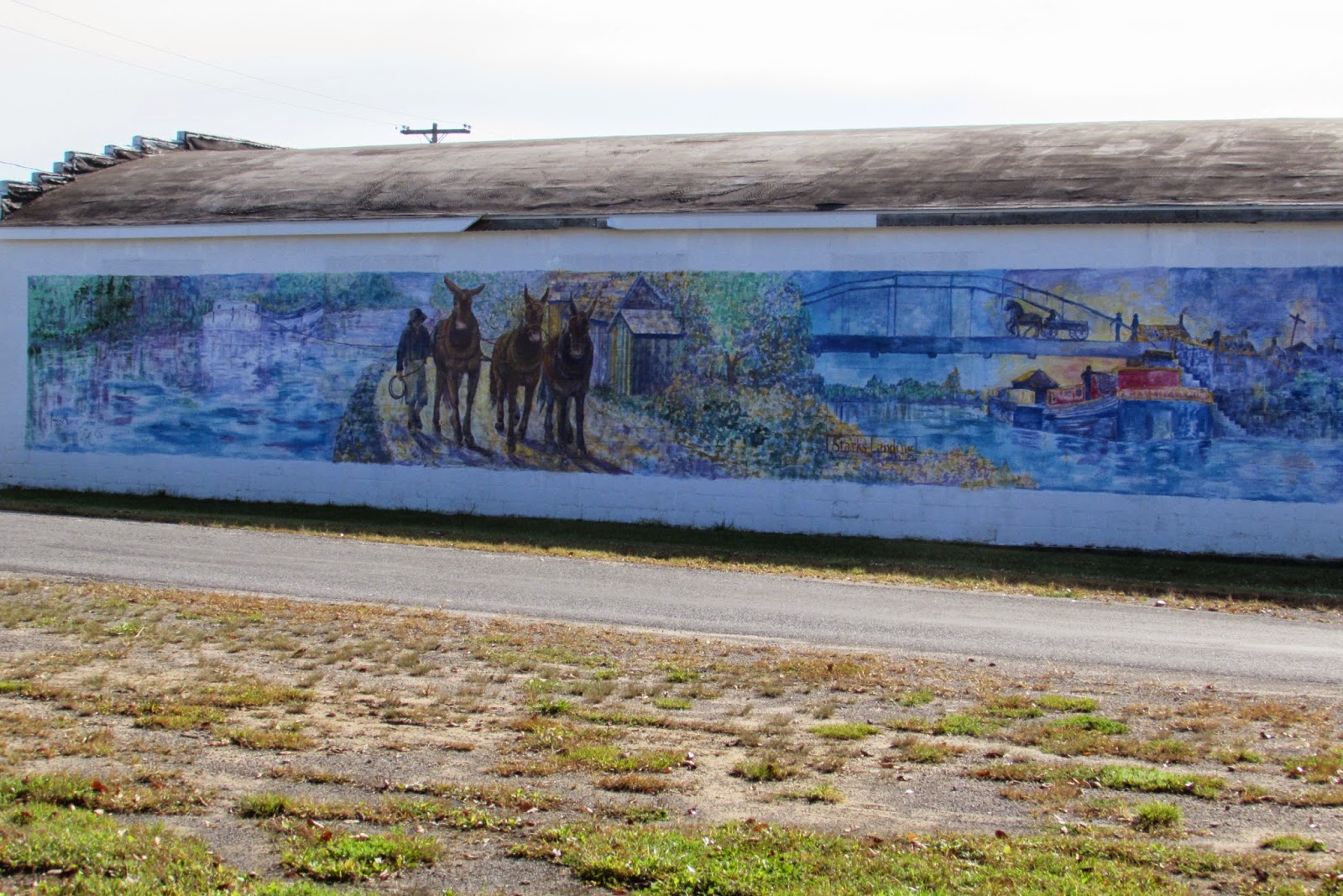 At Stark's Landing, a hamlet of Verona, we see this mural is on the Verona town garage facing the towpath. The mural was done by local artist Jane Grace Taylor, there are three scenes depicting life along the canal in the mid 1800's in three nearby hamlets. You can read more about the mural and artist here.


We didn't quite make it to Rome NY but by the time we turned around we had ridden over 8 miles, we then rode the 8+ miles back albeit a little slower. We had a great time just being out again, love the retired part of semi-retired.

Our wonderful fall day was topped off by another beautiful sunset across Lake Oneida. 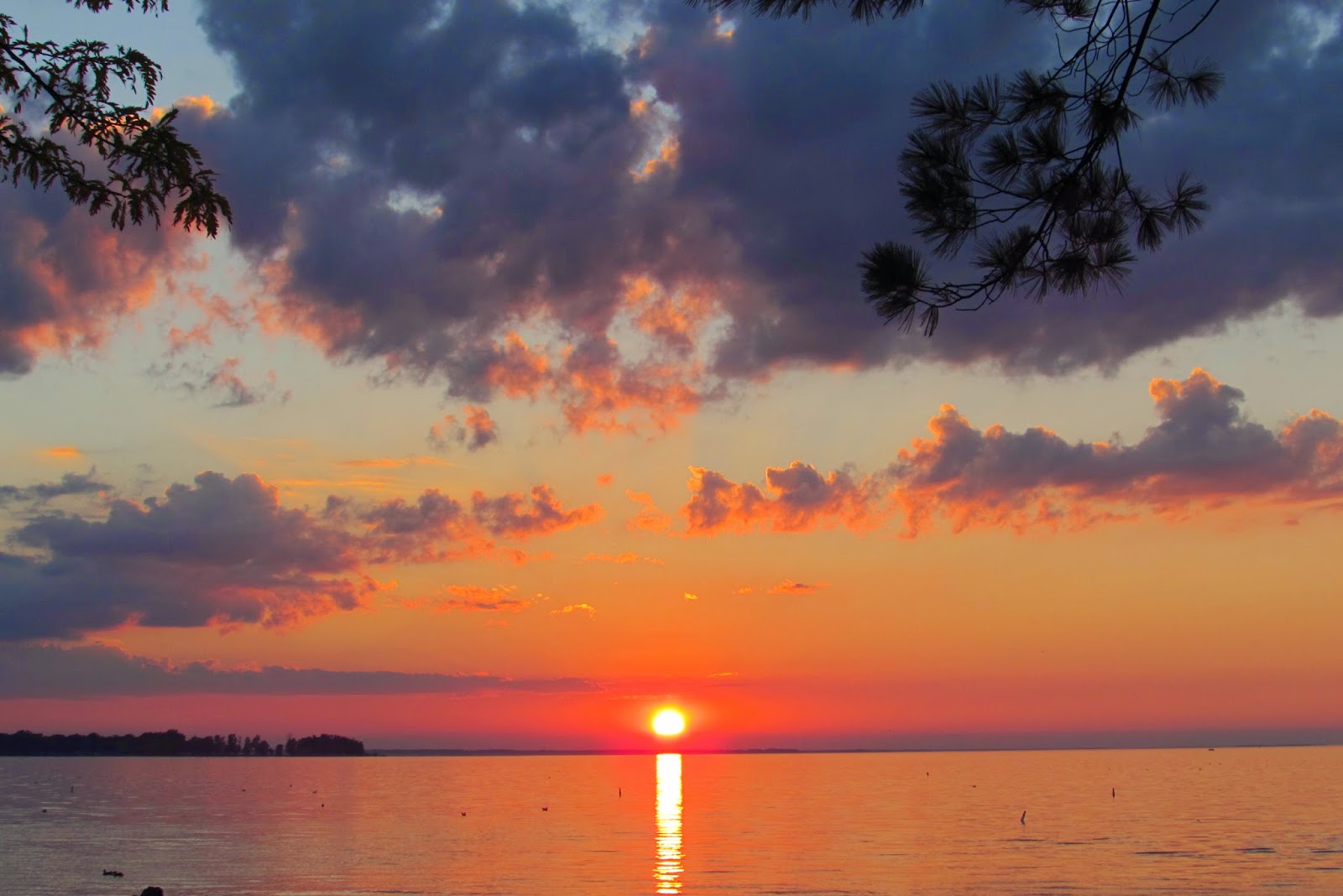 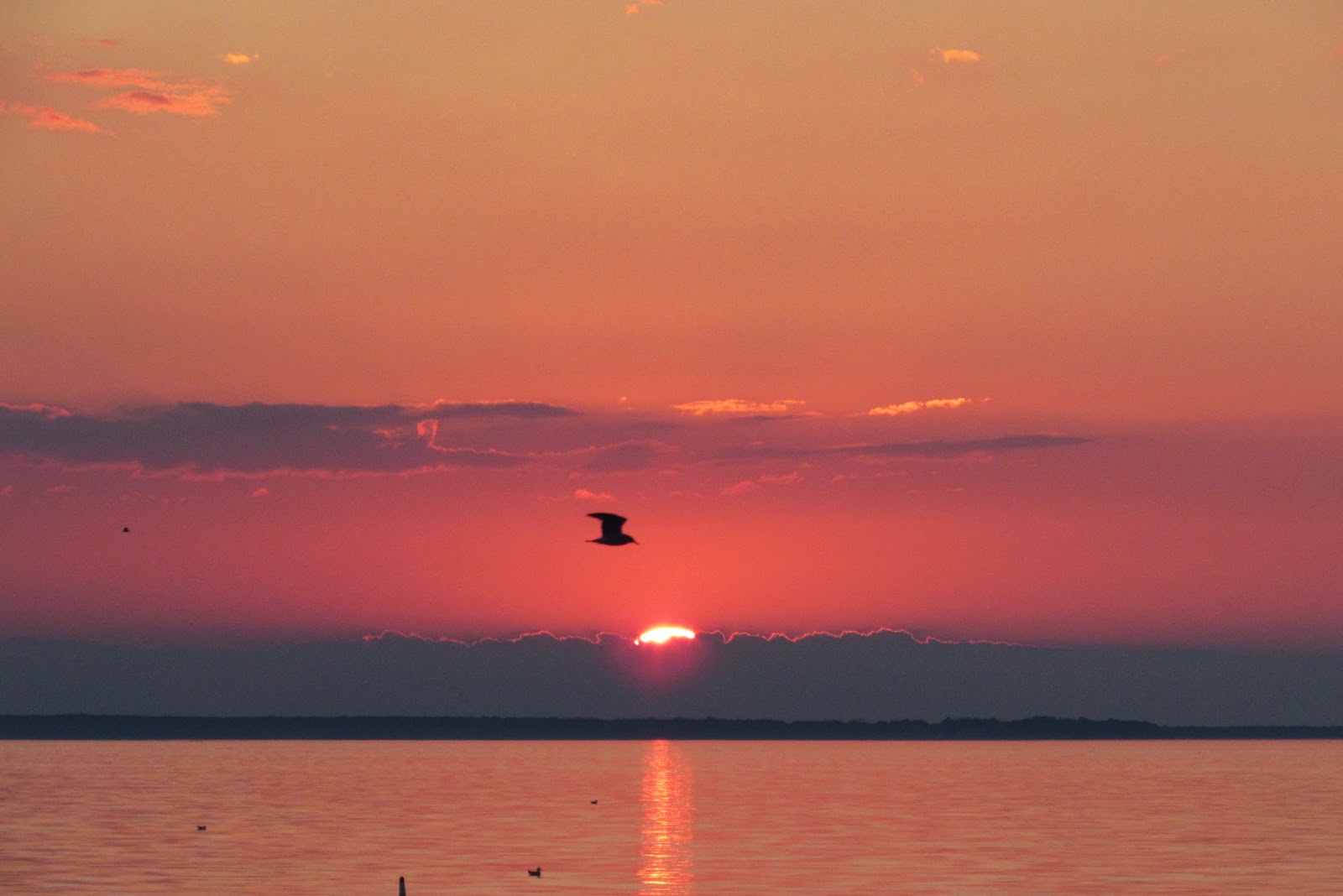 Our last days in VT were filled with work and goodbyes. Dave was busy during part of it working his last seven day stretch, on one of his OT days I went into town with him. A stop at one of the largest maple syrup producers who just happens to be a friend from our days in Huntington. After a nice catch up on our families I left with wa winter supply and some for the boys when they visit us this winter. A final stop at my hairdresser of 18 years and then off to a girls lunch with two wonderful ladies, just forgot to take any pics.


One evening we got together with some of the seasonals who were in the park during the week, I had heard about wannadingers in a post on another blog and had made the appropriate sticks and laid in the necessary accompaniments. Sean & Helen and Dan & Lois were great sports in our first try at wannadingers, Pillsbury Grand biscuits smoothed and stretched over the end of a wannadinger stick then cooked over a fire, when done fill with whatever you choose, we did both sweets and savory.  See you guys next summer.

Last Thursday was both of ours last days at work, by 5pm we were both off and done for the next 7 months. To all of those who were a part of Dave's send off at work a big thank you, it meant a lot to him, he'll see you on May 1st all rested and ready to take care of your tools and projects. 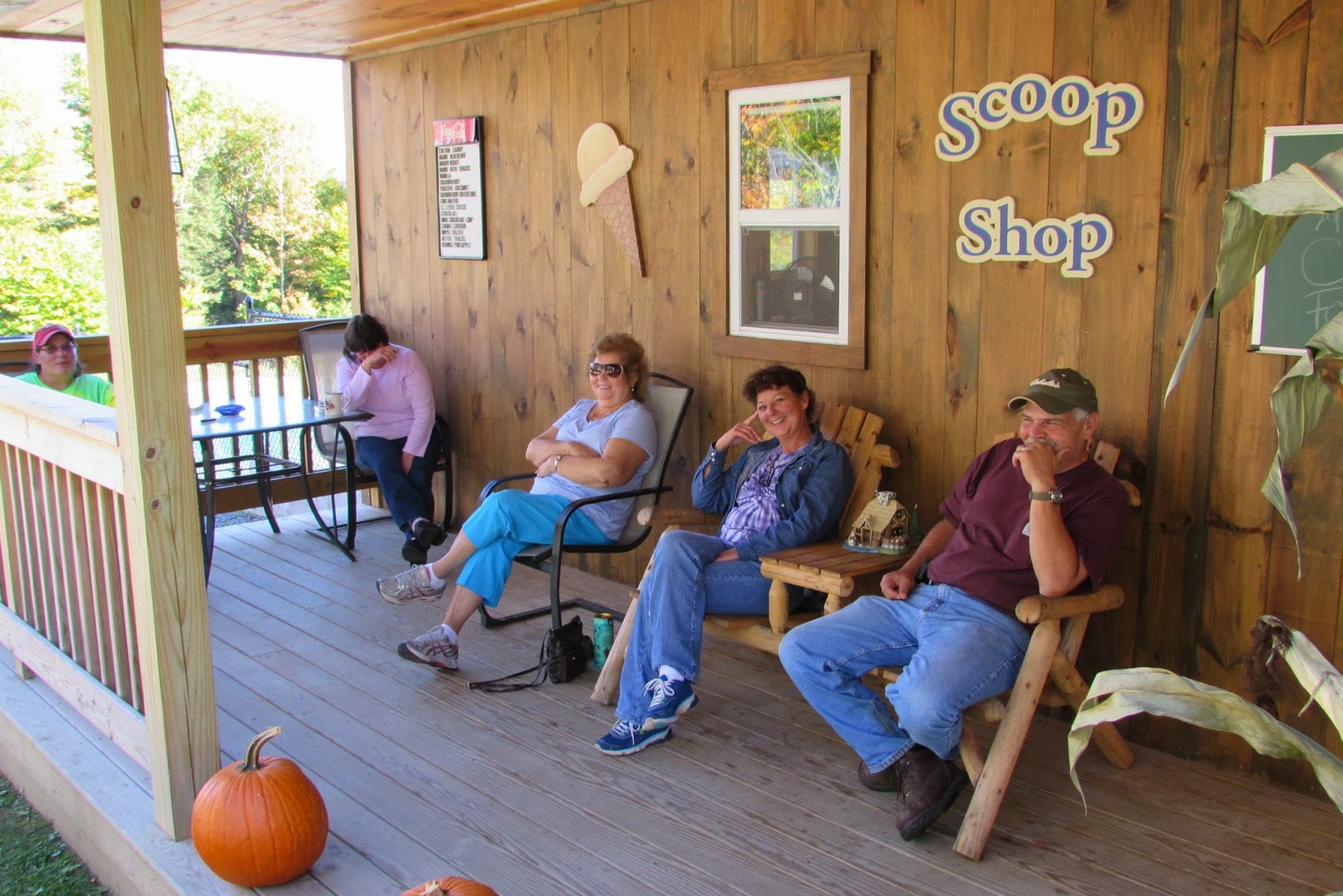 Friday there was a small goodbye pot luck held for us at the campground, great food and better company. Again thank you, we had a great summer with you all and look forward to seeing you next summer. Afterwards we joined the group around a campfire and tried wannadingers again, still a work in process, another few times and we should have the science of wannadingers down. 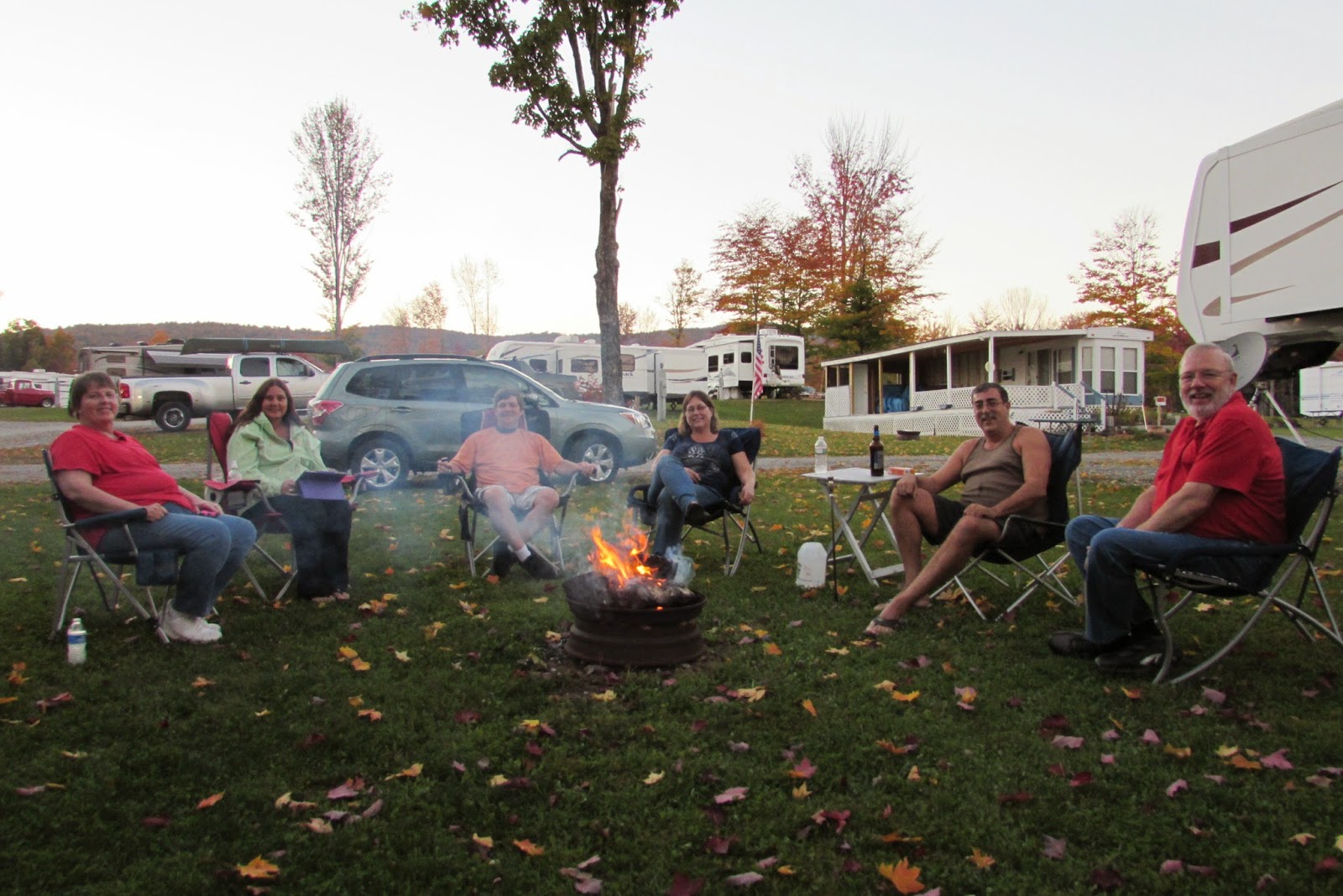 Saturday our friends of many years from Huntington came for our last get together of the summer. A great dinner followed by the start of a game of Farkel ended up abruptly when our friend Mike went into annaphylatic shock. After Mike lost consciousness a few times and refusing an ambulance his wife, accompanied by the other couple, took him to the nearby ER where it was determined he is now allergic to shrimp probably. He was finally released about 2:30am after recieveing 4 IV's and having had a number of test done. What a way to end our summer with them, so glad Mike is okay and he'll just have to learn to live with his new found allergy, no more shrimp po'boys for him. Vermont decided to grace us with her beauty before we left, what a difference a week makes. 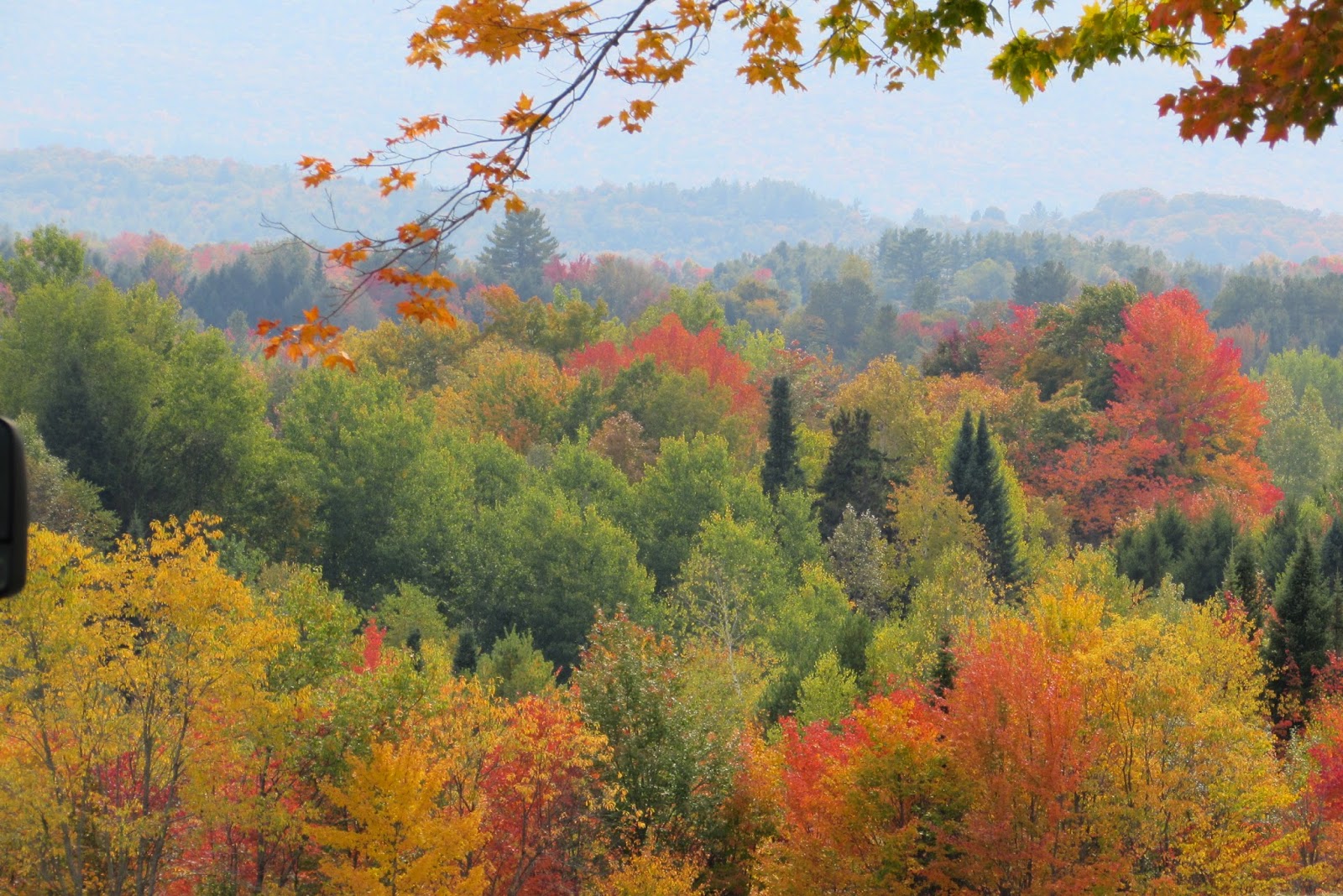 One of the definitions of morass is: an overwhelming or confusing mass or mixture. For a few weeks after losing our friend to suicide that was how my mind felt. Eventually I stopped crying every morning in the shower, still don't understand why. For us though life goes on with a touch of sadness that will always be there. 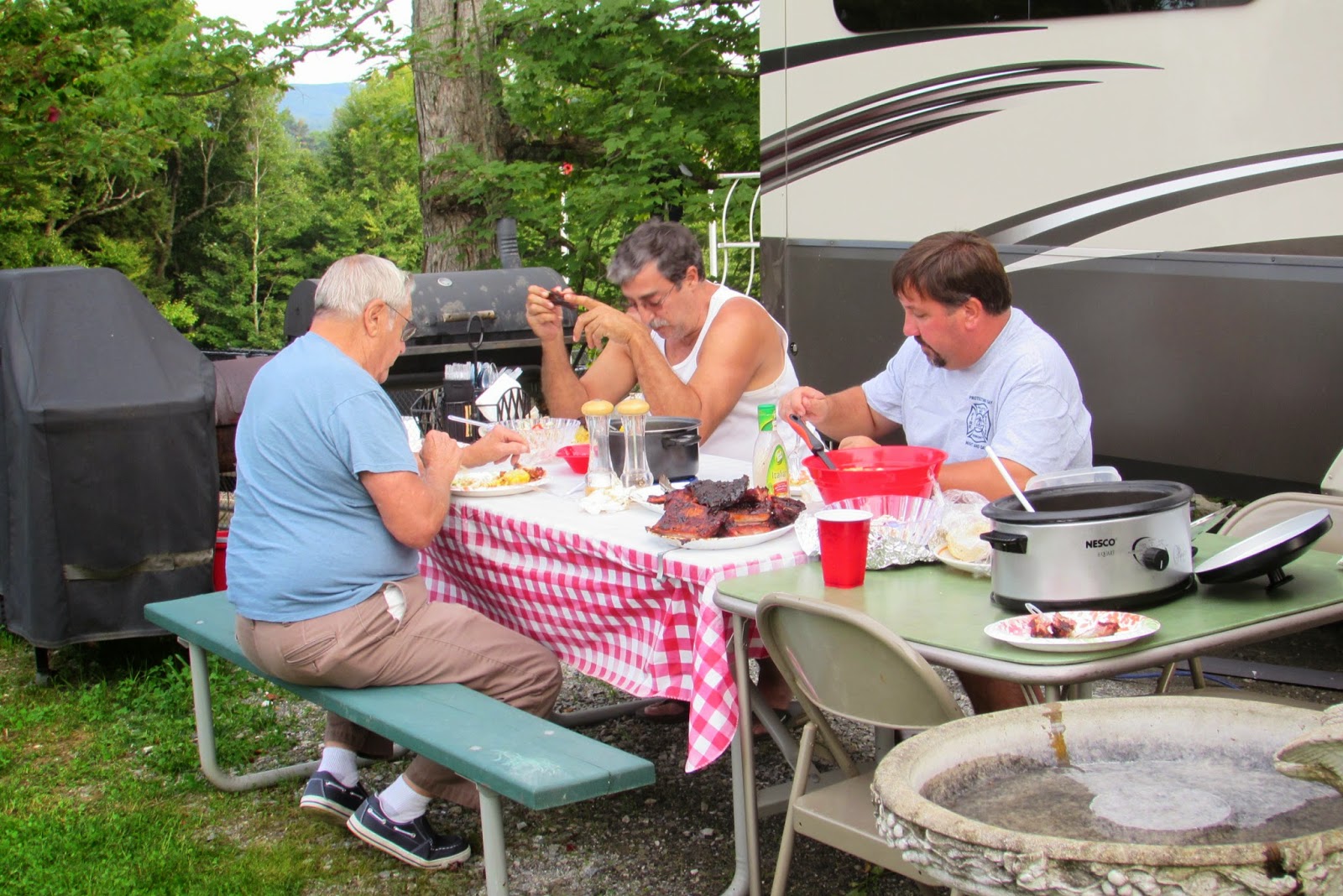 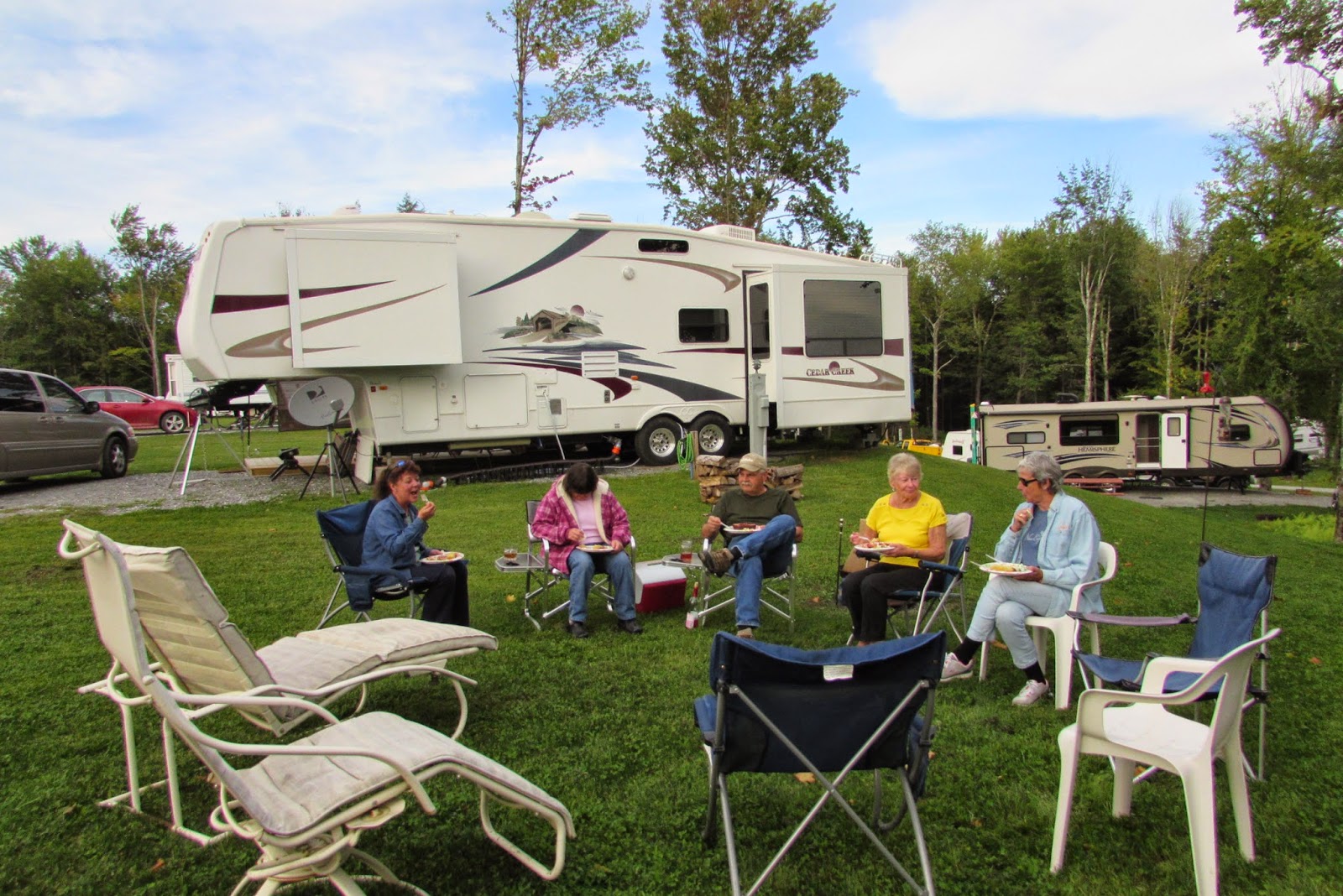 September has been a quiet month for us, Dave continued his crazy work schedule and is now a handful of days from being done, none too soon. One of my coworkers quit (the owners sister) so I've worked a few extra shifts, not a bad thing as we wanted to get some new chairs here from the store. The campground has quieted down since Labor Day and some of our seasonal friends have already left, the days at the store are quiet. Before the leaving started a lot of us had one last meal together. 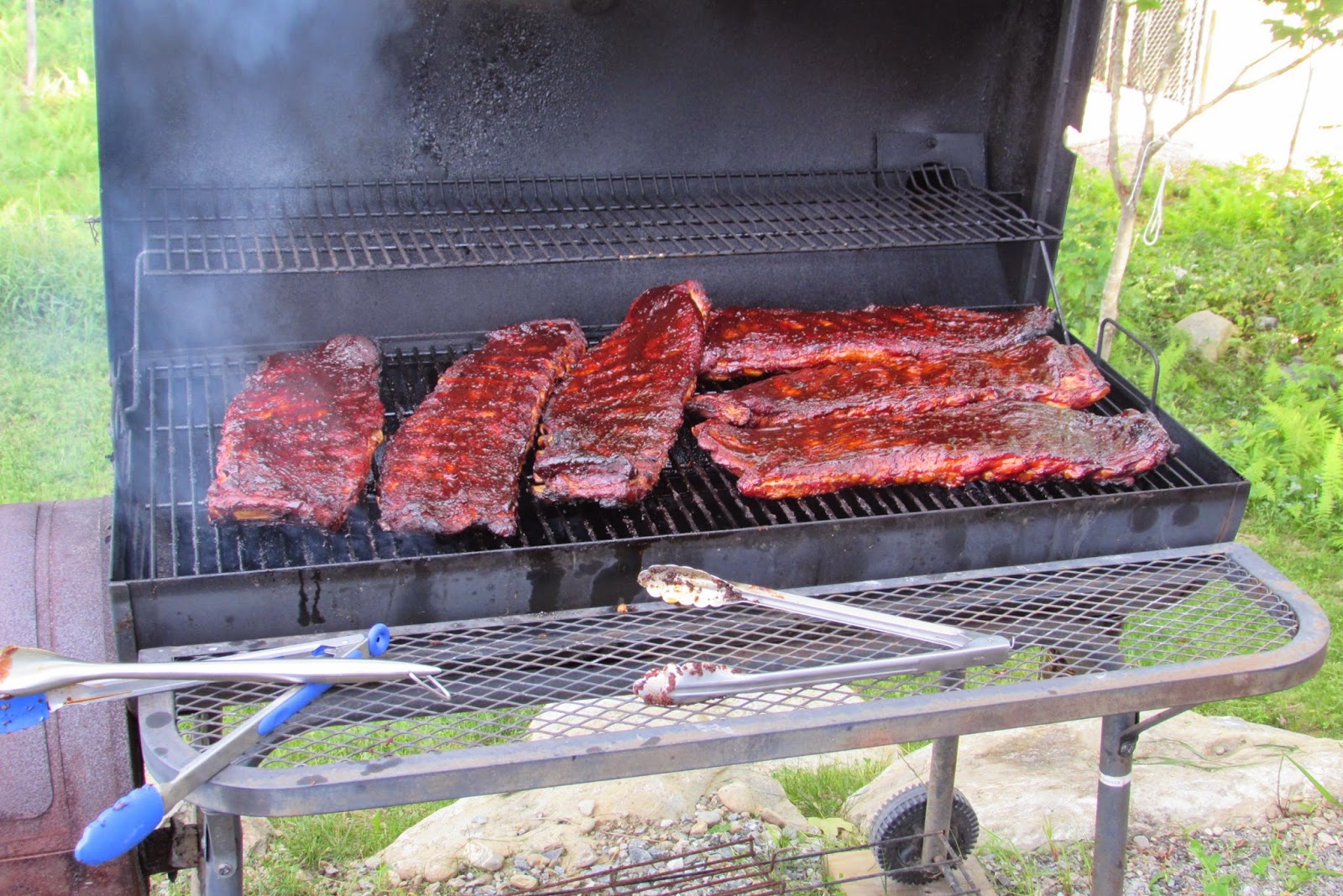 Unfortunately our friends from our former VT hometown have been busy all month, expectations of lots of visits this past summer never materialized. Hopefully next summer will be different, the days do get a bit boring when Dave is working a 12 hour day. While old friends haven't been around we've been enjoying the company of new friends. 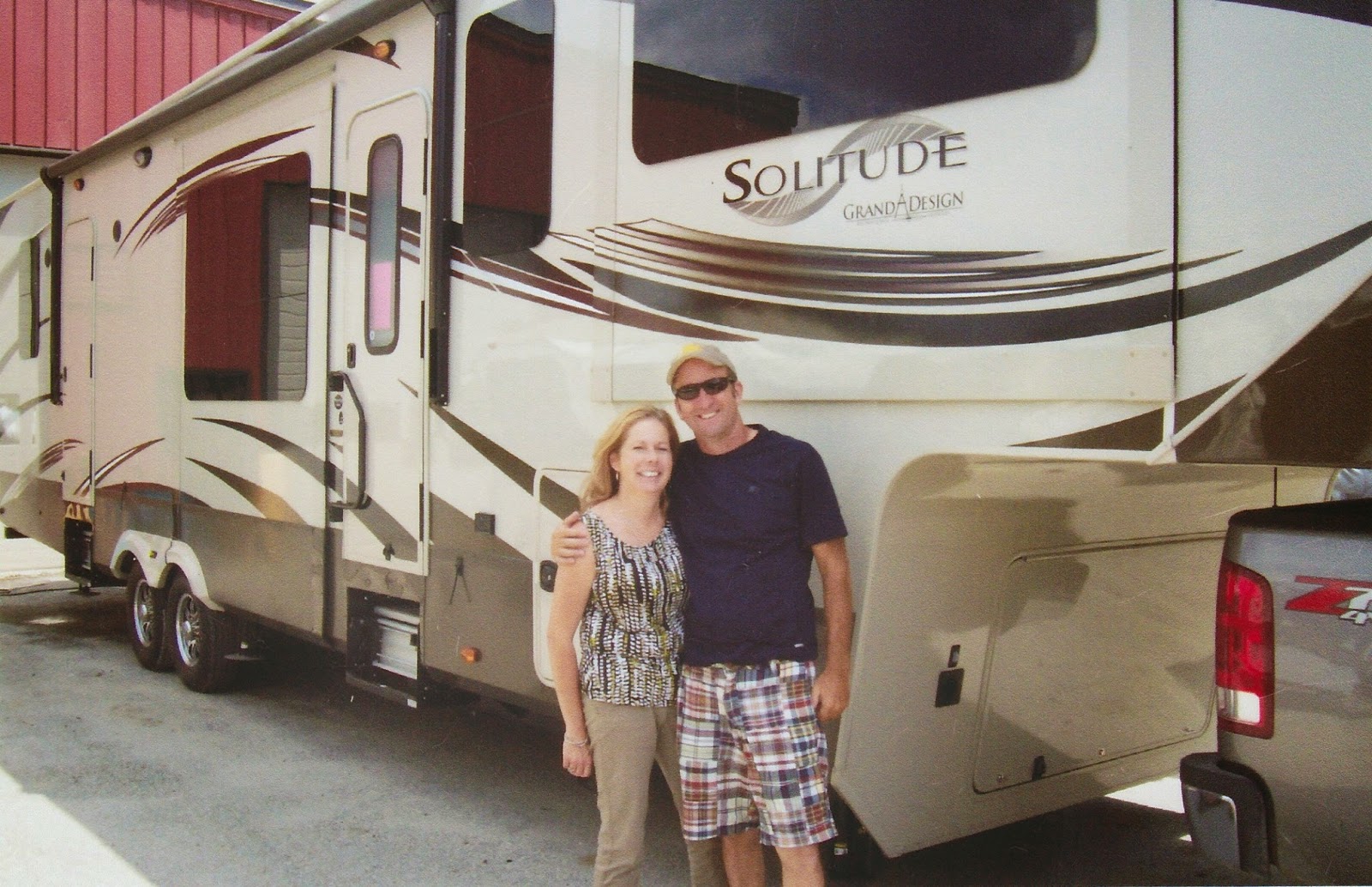 Not to long ago we met Alison and Dave, soon to be Grand Design Solitude owners. Until last weekend we hadn't seen them since the got their new rig, Their new front living room Solitude is 42.5' long so when Alison called we got them into a site with plenty of room. Dave and I spent a great evening visiting with them in their beautiful rig, it was nice to get to know them better. Alison has started the Grand Design owners group on Facebook so we "talk" all the time. They hope to be full timers before too many years, still have one left in high school so it shouldn't be too many years. Forgot to take a picture so borrowed a picture from Facebook of them and their new beast, see you next summer guys.


One of Dave's coworkers came in for a weekend along with some of their friends, a few nights around a campfire and new friendships were born. They were here for Halloween weekend and voted in the site decorating contest, I'm sure they were instrumental in our taking second place. 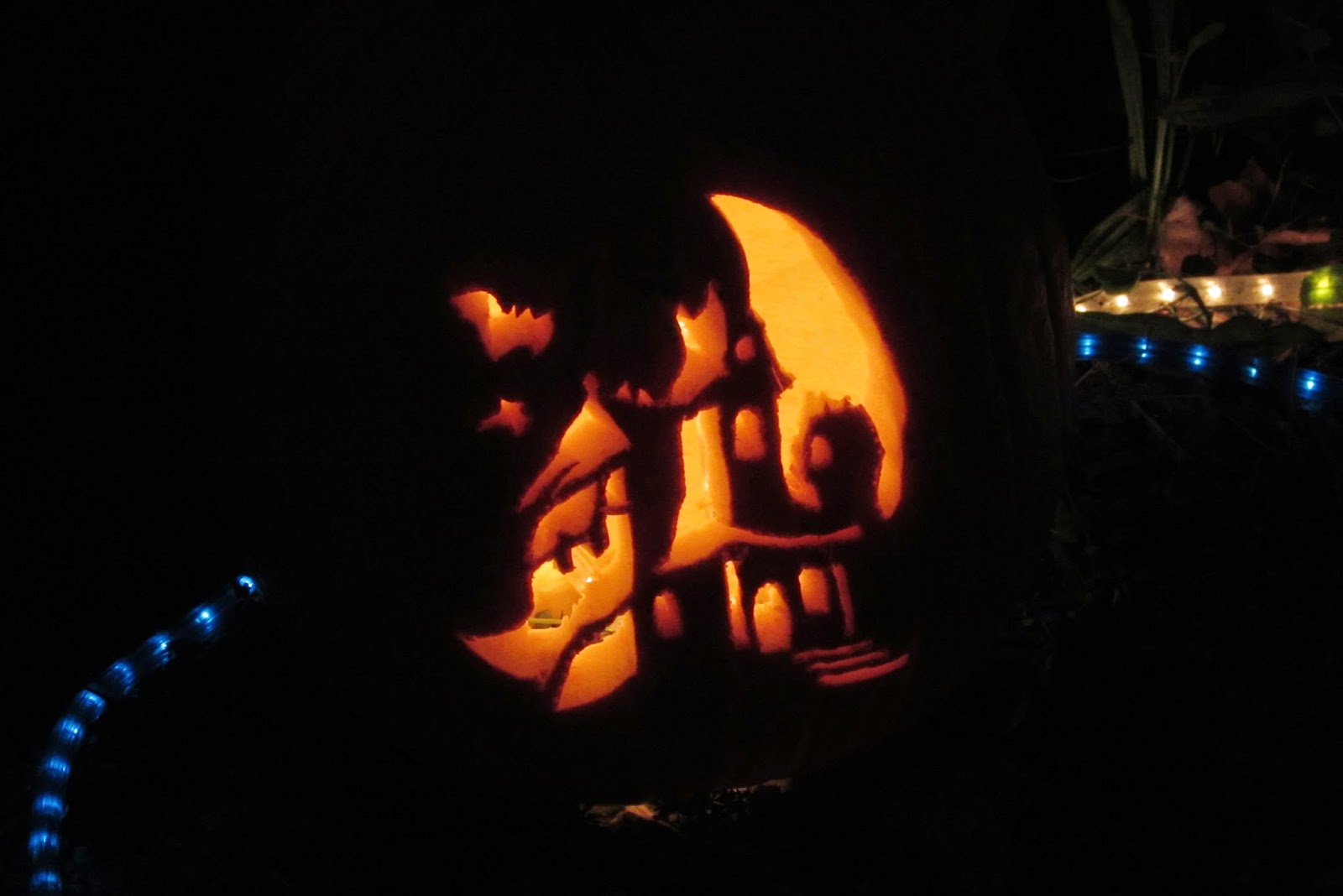 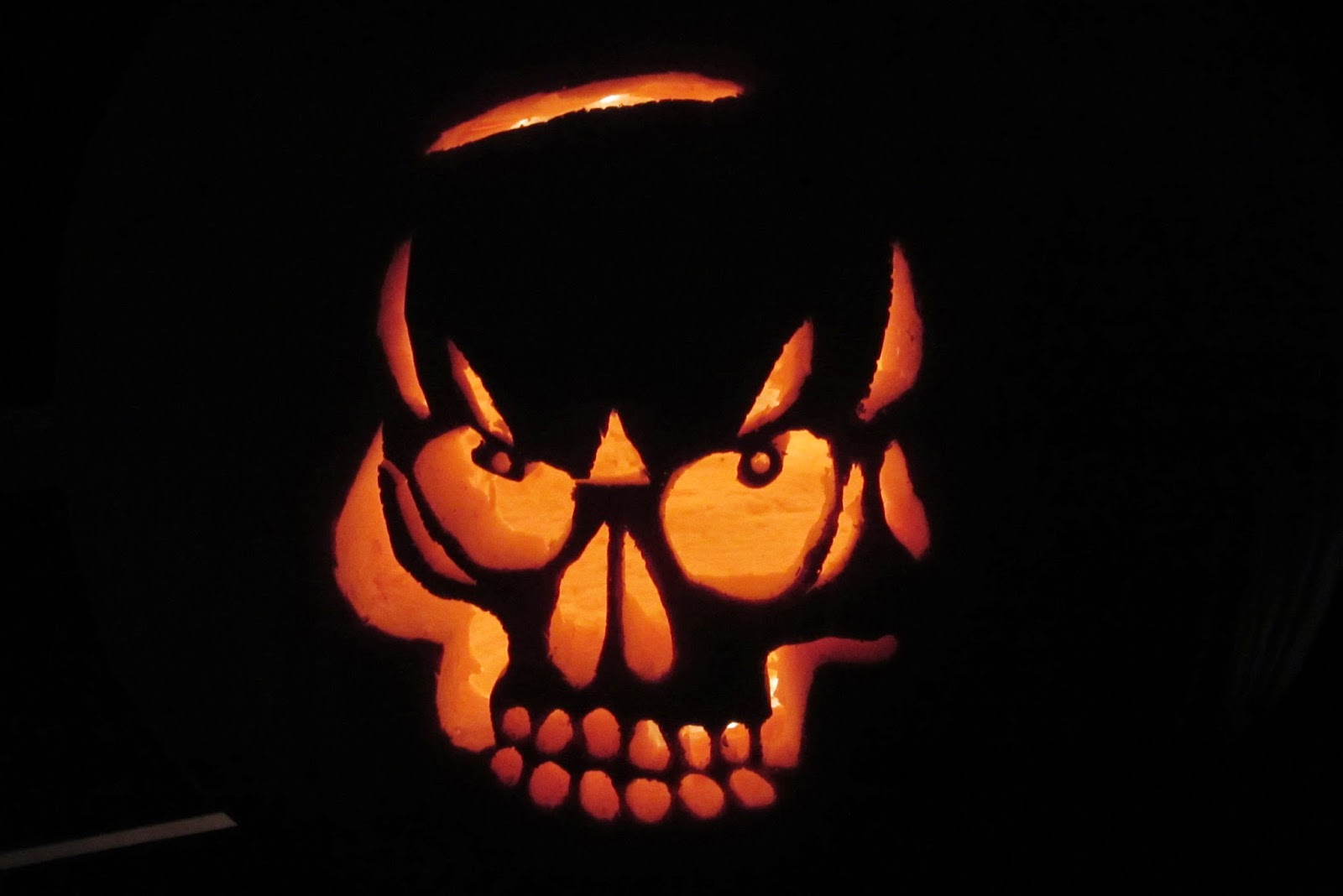 .
Second prize was a free night stay, hoping our friends from IL will be coming out next summer so saving it for them. 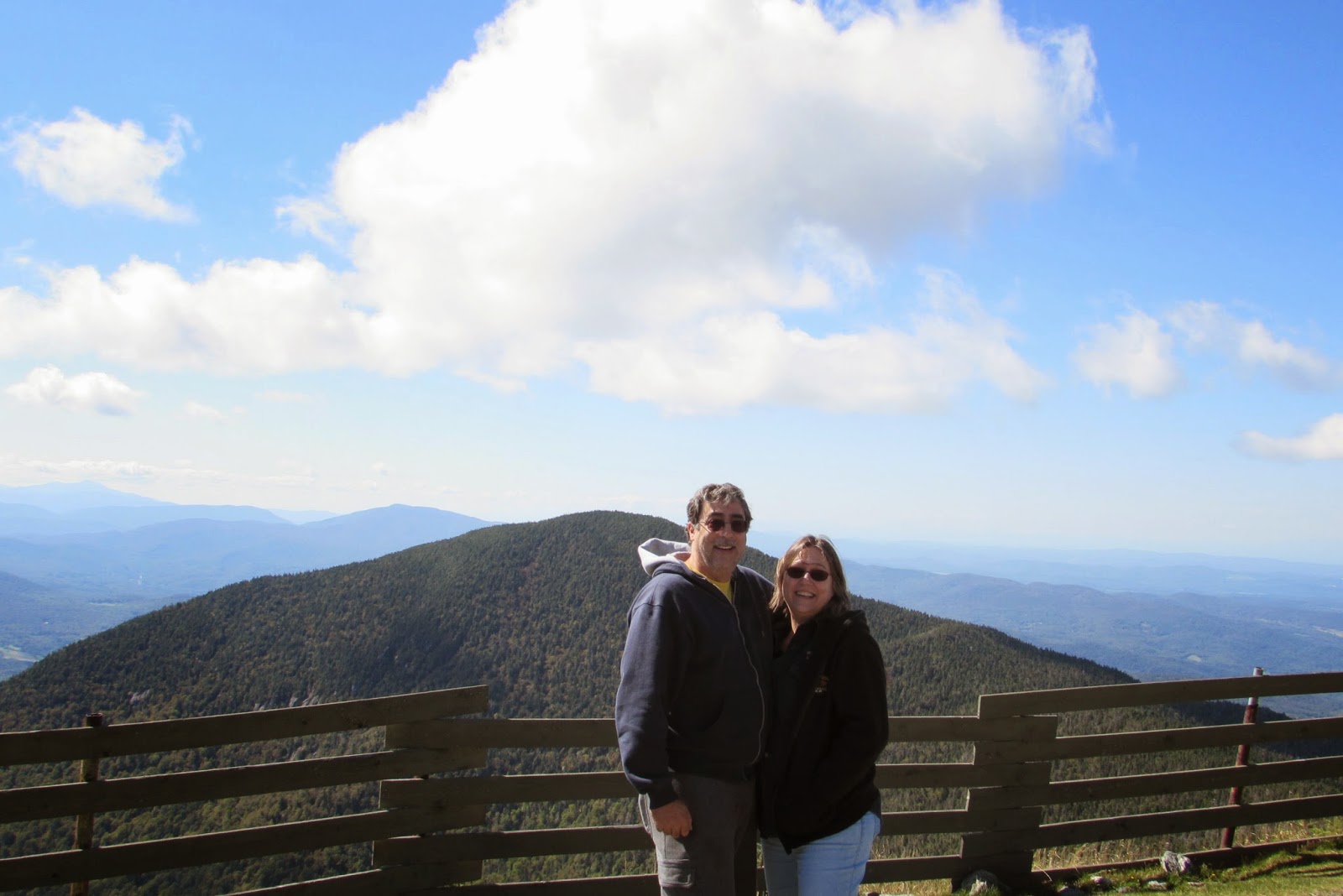 .
We did finally take a day and play tourist for part of it, we had never been to Jay Peak Resort so took a ride to the north hoping also to find a bit more color. While we are not skiers and you'd never catch us up on the mountain top in the winter we do love visiting VT ski resorts in the summer and riding to the mountain top, taking pictures and riding back down. While the color hadn't changed and it was a bit overcast it was good to be out playing again. 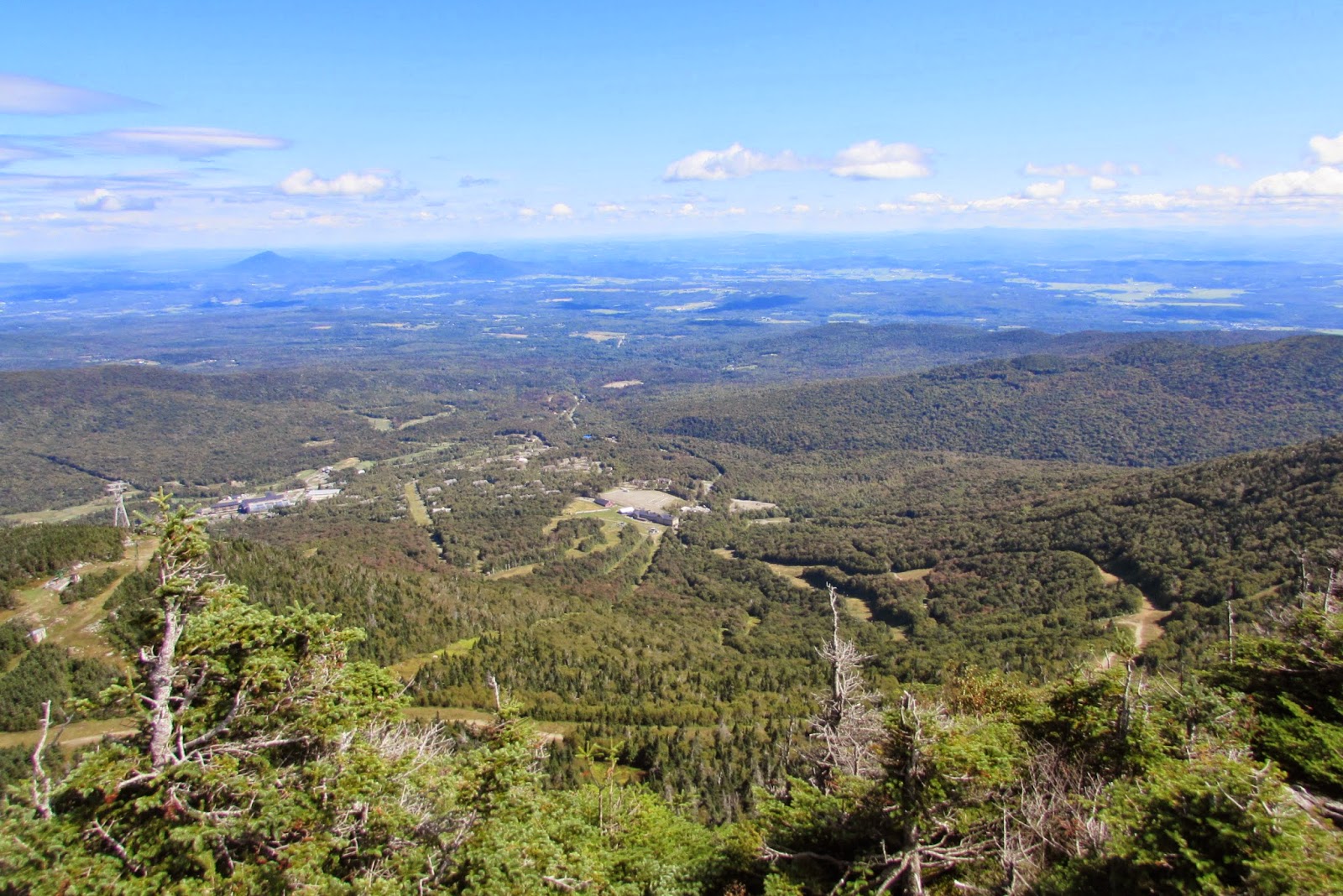 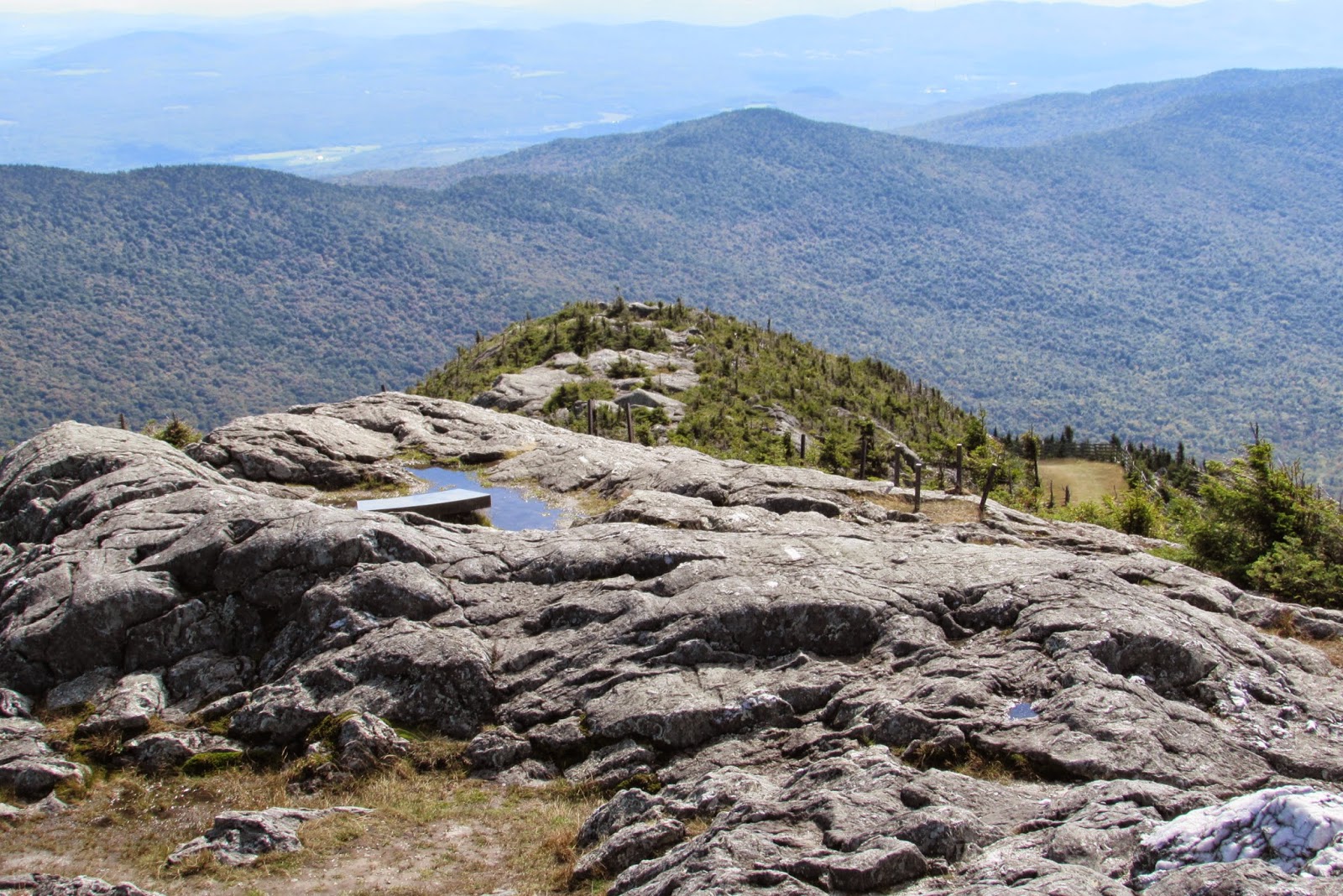 The Long Trail which runs across the VT high peaks is here at Jay Peak. We've done parts of the Long Trail in various places over the years, our favorite hike was up Camels Hump which was in our former hometown. 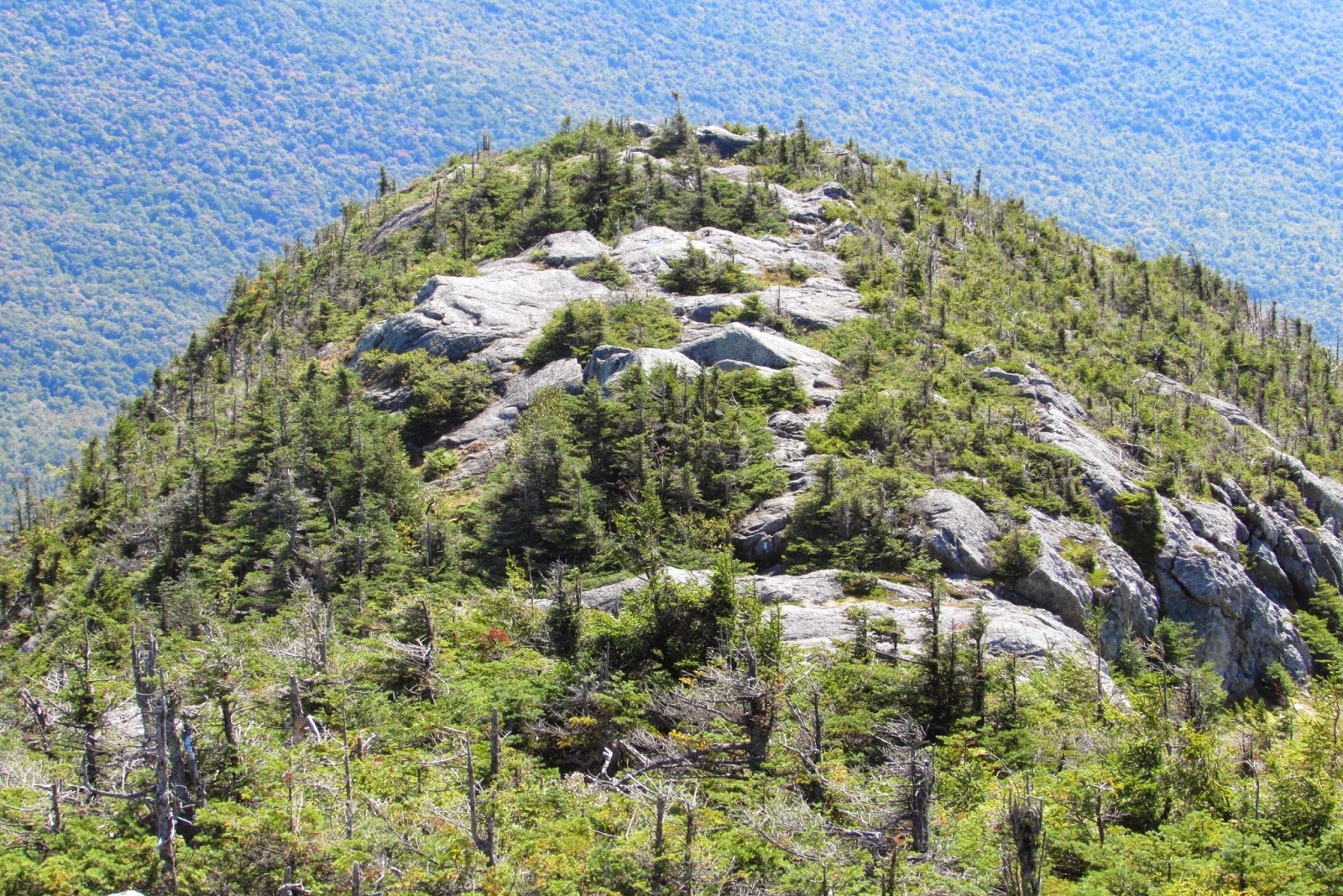 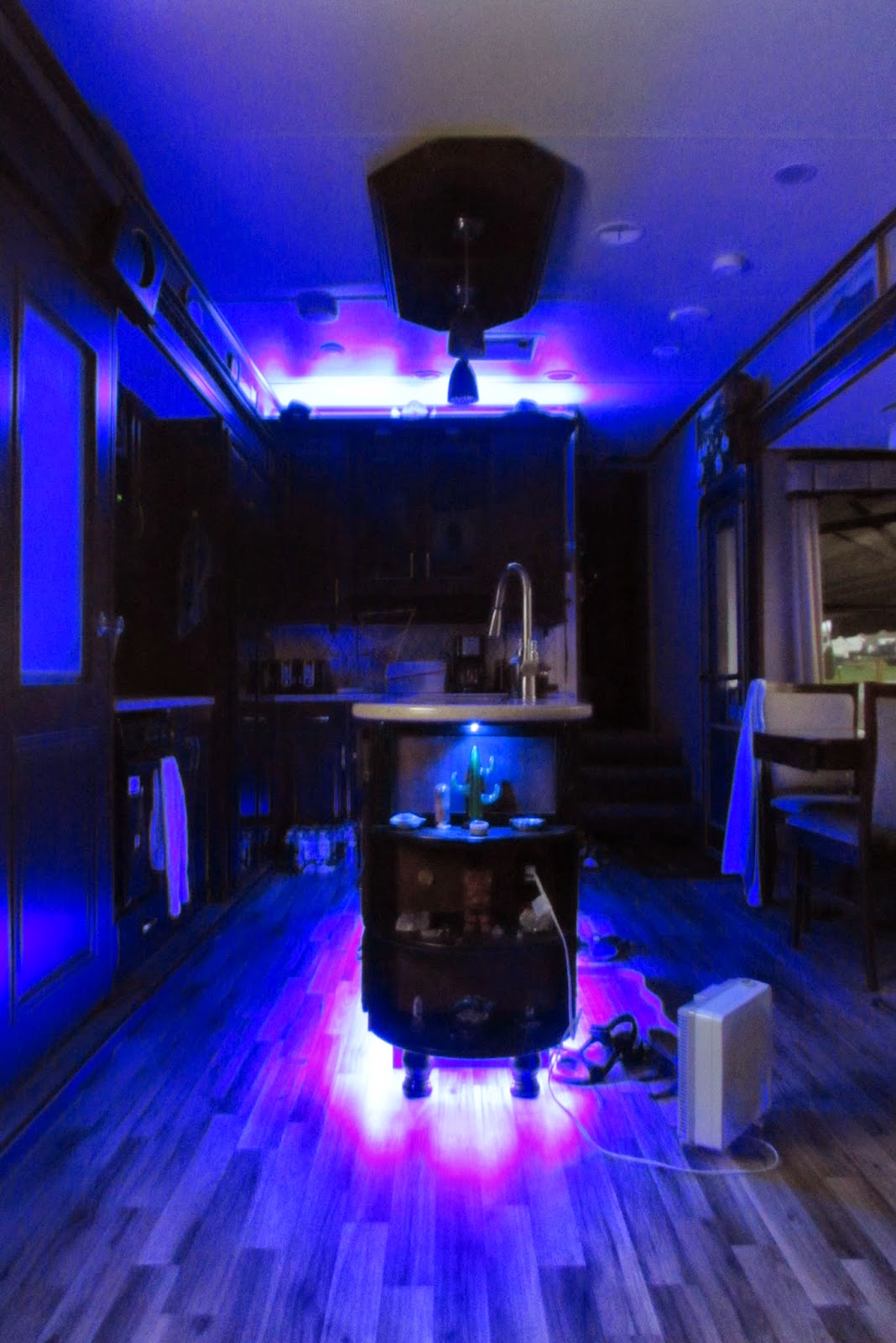 We've finished up running a bit more LED lights over one of our cabinets, still trying to figure the best way to add some ambient lighting in the very back. The basement has been reorganized and inside I've gone through the closets and cabinets getting things ready to travel. We were expecting (and received) a hard frost so Dave harvested what was remaining on his tomato plants, cut back the herbs for drying and brought in a few plants that we are going to try and take with us.

Heading into the big city tomorrow, an appointment with my hairdresser one last time and lunch with my two best girlfriends in VT. A few stops to replenish some made in VT products (maple syrup and Switchback beer) a few goodbyes to some local business owners, a visit to UPS to make sure all is good with our mail forwarding then off to rescue Dave from his OT day. A few days to get the inside spic and span, the weekend to get the site prepped for winter, last visits with friends and we're out of here.

We will leave VT on Sunday or Monday, plans are to stop three times before getting to IL where we will spend a few weeks camping with friends and visiting family. Our first stop is Verona State Park on the eastern side of Lake Oneida, nearby is Old Erie Canal SHP where if the weather cooperates we will get in some much needed exercise on our bikes. Our next stop will be West Branch State Park in OH where if the weather once again cooperates we hope to bike in the Cuyahoga Valley National Forest, after reading about it on Sherry's blog In the Direction of Our Dreams. We'll then head to somewhere in IN to wait over the weekend before heading into Hudson IL to again camp with friends. We do have some long (6 hour) travel days but none are back to back and for the most par it's roads we've been on before which helps.

Our time here is ending like it began with mice trying to visit, early detection on our part surely helped. Dave set the traps, we went to bed to watch tv and before we had hardly begun the trap went off, the intruder got lucky but then decided to chance that luck a second time. Needless to say he didn't learn as he was caught before we the tv went off, the morning brought news of the demise of another intruder. Time to move on!!!!