September 20 - 26, 2019
Before we headed west we headed to Elkhart IN, the birthplace of our Grand Design. A 6-hour ride, made longer by the loss of an hour when we were once again in the Eastern Time zone, found us pulling into the Elkhart County Fairgrounds. We were able to choose any site we wanted, due to a function going on in some of the halls we couldn’t get to the area we wanted to stay in. There are trains going by constantly but with AC at night it wasn’t an issue.

The reason we went east before going south and west is Lippert had agreed to look at our RV and repair the broken weld issues we’ve been having. Hope this fix will give us the confidence we need to continue to travel in our house on wheels.

We enjoyed the weekend, doing some shopping at a few Amish stores, finding Dave his happy salt and just relaxing at home. On Sunday evening we met our friend Bill and his wife Tracy for a Mexican dinner. We first met Bill in 4/2015 when we took our home to the Grand Design service center. We’ve seen him a couple of times since but this was our first time sharing a meal together. Bill, along with Coley and Ryan Brady, formerly of Heartland RV are starting up a new RV manufacture company, Alliance RV. So dinner conversation was primarily focused on providing him an insight into what, as full-timers, we find important in a 5th wheel. Before we knew it a few hours had flown by and we needed to get home so we could get a few hours sleep before our early wake-up call. 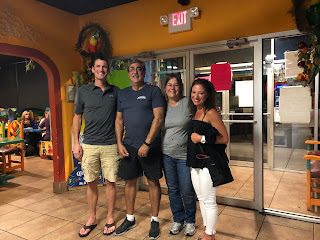 Monday morning we were up and on the road by 6:45 for the 4-mile ride to Lippert for our 7am appointment. Upon arriving we were soon met by Mathias who was going to be our technician, after going over the issues we’d been experiencing we left our home in his capable hands. After breakfast we headed over to Grand Design, we knew no factory tours were available because this week is dealer week. We needed some molding to replace the ones they were taking off the front end, after almost 6 years it had become brittle, wasn’t going to come off correctly and would have to be pieced back together. Nicholas Cotner, one of the service managers at Grand Design got us squared away quickly. While there we received a phone call from Lippert, they wanted us to come back so they could show us some things, didn’t sound good so with much trepidation, we headed back. By the time we arrived back at Lippert they had the front skin off, the front cap pulled back to expose the kingpin, they had found multiple welds that had broken. They wanted to keep the rig overnight so they could do a complete inspection. No problem with us, all we wanted was our home back in shape to safely travel, we’ve got plans with some of you and we want to keep those plans. 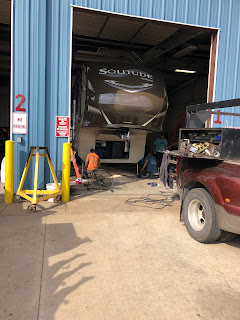 One of the things we wanted to do was take a tour of Alliance RV’s creation and prototype, of course, no photos as it’s all a work in progress. They are in the process of building a ginormous building for the production facility and have one prototype being built. We were quite impressed with what we found out and are considering one. Their focus will be quality, durability and customer service and plan to keep it a smaller operation, they currently think they will be in the 65k-85k price point, affordable without being crazy. With the issues we’ve been having work looking for something that has a strong structure, the bells and whistles aren’t what will sell us it’s how it’s built that will. They hope to have production started late this year or early next year. Currently, they have plans to be at the Tampa, San Antonio, and Denver RV shows. We wish Bill and his partners all the best.
Finding a decently priced hotel took some doing, with the dealer show going on decent rooms in Goshen were in the $140+/night range, finally found a highly rated Sleep Inn in South Bend for $79/night. Decent hotel but we didn’t sleep well, nothing like sleeping in your own bed.


Tuesday we had a slow start, with nowhere to be till our tour of the Jayco 5th wheel line at 2pm, we stayed till almost check out time. Our tour of the Jayco dispelled any idea of us considering them, while they do have a robust frame there are some factors to their coaches we didn’t like, most importantly the interior doors Dave would have to duck to get thru. We met some people that on the tour that heading to the Montana tour right after so we figured we tag along. Since we would be going by Lippert we made a quick stop there and found out it would be closer to the end of the day before we got our home back. Our tour was of the Montana 5th wheel line was quite eye-opening, having already owned a Montana we were pleasantly surprised to see they’ve improved their quality quite a bit. Glad to have taken the time to check both manufactures out.


We arrived back at Lippert to learn the extent of the problems our home had to have fixed. In a nutshell, we were close to a catastrophic failure. The welding we had done in VT helped hold the RV together, glad we made the decision to cancel the Maritime trip, one day we’ll make that trip. Below is the post Dave made on Facebook after we got our home back.
“As some of you might have heard, we were having issues with broken welds on the frame of our home. We had some welding done in Vermont to the welds I could get to. We decided to cancel the rest of our trip to the Canadian Maritimes because we didn't have confidence in the rig and head to Shelbyville Illinois where Faye's parents live. The welds seem to hold as we traveled from Vermont to Illinois but we still didn't feel safe traveling with this rig anymore. We contacted Lippert Components, the company that built the frame and nicely asked if they could offer some advice or help in making us feel that our rig is safe enough to travel the country like we have been. Lippert contacted us back and to make a long story short, asked us if we could come to Indiana to their shop for repairs, so off to Indiana we went. Lippert had the rig for two days with 3 guys working on it. The problems were a lot worse than I thought. After removing the front skin and loosening the cap, they found about a dozen broken welds that including the ones we had repaired. They ground off the old welds, re-welded and reinforced all the problem areas. Reinforced around the pin box and proceeded to inspect the rest of the frame. They found the frame was cracked above the Equalflex (where the springs come together) units on both sides, they welded plates on both sides of the I-beam on both sides of the rig. They welded on all new spring mounts, installed new Equalflex units and new Equalflex mounts. Then they dropped the belly and found two broken cross members which they repaired and reinforced. We were very close to a catastrophic failure and were a danger not only to ourselves but to anyone around us on the highway. We've worked our rig hard and it's been on some pretty bad roads including Alaska. We've put over 70k miles on her and it probably took a couple years to get this bad. I'm just thankful to Lippert for stepping up and repairing my 6-year-old rig to make it safe again for us to continue our travels.” 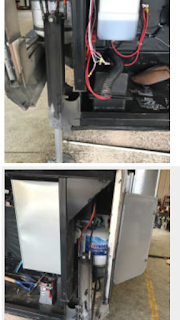 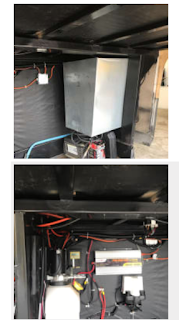 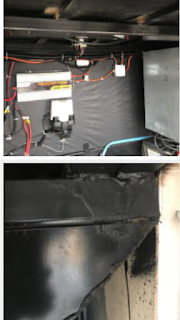 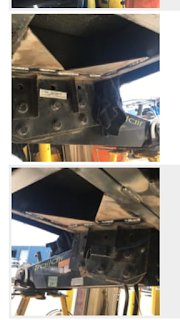 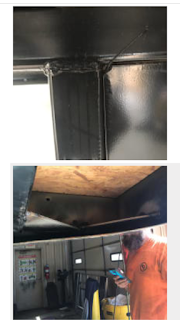 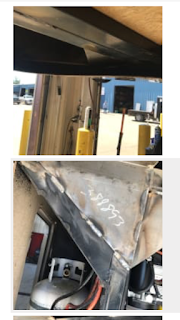 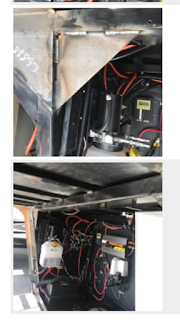 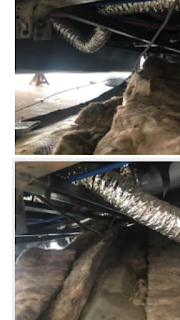 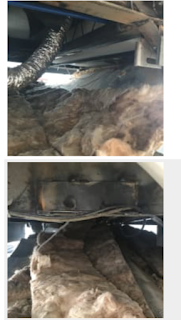 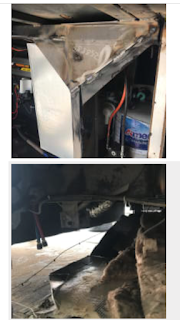 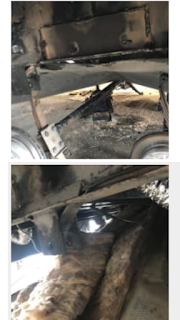 After profusely thanking those who were responsible for fixing our home we headed back to the Elkhart County Fairgrounds. A good night of sleep Tuesday, and Wednesday morning we were ready to hit the road for points west. As we brought the large super slide in it was binding a bit but we’ve had issues with it before, with a little persuasion it went in. 335 miles we arrived at Tailwater West COE Campground on Lake Coralville, we volunteered last summer for this project just had never stayed there before. Both of our living room slides gave us problems going out, frustrating. More things to figure out but first, we just had to head to our favorite Mexican restaurants in the area. Last summer we must have eaten at La Fiesta Mexican half a dozen times, once again it didn’t disappoint. 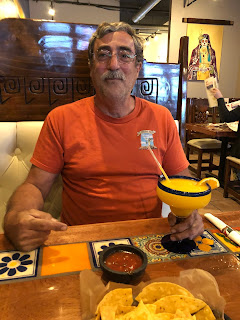 Thursday we spent the day trying to figure out what was going on, calls to JD the Grand Design service manager and Jack a Grand Design tech resulted in the conclusion that our frame has lost its camber, something I had never heard of. Evidently, when frames are made they are made so the frame has a smiley face to it when the RV is built onto the frame it levels the smiley face out, it appears our frame now has a frown in it resulting in our slides binding as they go in and out. The only way to fix that is to have more work done by Lippert, the only problem with that is they can’t get us in till 10/21. By dinner time we knew we couldn’t continue on our travels and had to head back east. Since Friday morning’s weather was supposed to be rainy with thunderstorms we decided to head to Lake Shelbyville, by 6:30 pm we were on the road and just a little after 11pm we pulled into Shelbyville. While we don’t like to travel at night much less pull into a place that late we know this area so well and we’d been in this site all summer so it was no big deal.  We’ve opted to come back to Lake Shelbyville where we can volunteer a few days for our site and once again spend time with my folks. We’ve canceled our reservations in Ft Collins but still have our Colorado Spring reservation on the outside chance we can get the RV taken care of earlier than 10/21.