We arrived at Justin's Diamond J RV Park on Thursday after an uneventful ride, always a good thing. We opted for a premium site that backs onto the desert, for $18/night with Passport America it's a great deal and a nice park, the sites have no picnic tables or fire rings and there are no restrooms or showers so you have to be self contained. There are trails in the desert right behind us, which we've been enjoying, there are a few park models and some very nice folks here. There a number of folks who make this their winter home, there's even another couple from Vermont here.

We've met a gentleman named Howard who has been coming here for a very long time, he actually established the trails in the area. Howard is 86 years old, been retired for over 30 years has had 5 motor homes and is recently married, his first wife of 66 years passed away from cancer a number of years ago. Howard's goal is to be the last WWII vet alive, he and his first wife traveled the country and he has been published in FMCA magazine and enjoys photography. Dave has joined him in the evening to photograph the beautiful sunsets we have had. He gave up driving a motor home a few years back and purchased a park model here, he spits his time between here and Portland ME. I sure hope when we're 86 we are in half the shape he is.

We've been doing a lot of tourist stuff here so instead of writing about them all I'll include links to the various places we've visited. All have been interesting and we are glad to have had the time to visit them, by the time we leave here on Thursday we will not have completed our list of places to visit, guess we'll just have to stop again when we're in the area.

The first place we visited was the Titan Missile Museum where I got to be the one who turned the key, not a responsibility I would ever have wanted in real life. The basic philosophy was mutual destruction, glad it worked. 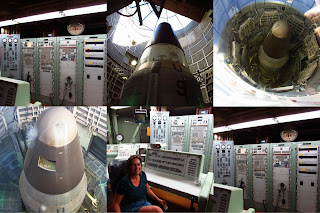 Our next stop that day was Mission San Xavier del Bac a beautiful church dating from the late 1700's which still holds regular services. 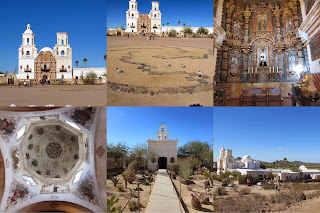 Sunday we headed into to Tuscon to the farmers market lots of vendors selling lots of fresh produce, organic meats, baked goods and artisan wares. We were pegged for tourist by some of the vendors since Dave was there in a tank top which the locals gave up wearing a few months ago. Forgot the camera but it was quite busy and well worth going to, the first farmers market that amounted to anything that we've found so far, one vendor did say Phoenix will have some great markets too.

After the farmers market we headed to Biosphere 2 of which we have seen specials about on tv, an interesting place to say the least. Very interesting place and maybe someday the information learned here will help us colonize another planet. 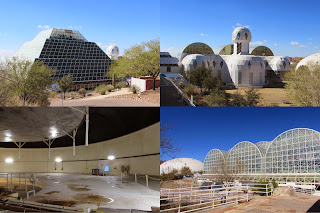 Monday was another beautiful day and we had more places to explore so we headed to Colossal Cave we always enjoy visiting caves. While this one is a dormant (formations are not growing) cave the forming of it through sulfuric acid was not something we had seen before. If you are going to see lots of crystal formations this is not the cave for you, for us though it was interesting and we're glad we took the time to see it. 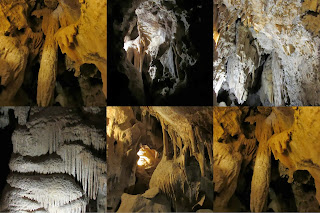 For our afternoons entertainment we headed to the Pima Air & Space Museum where they have over 250 aircraft on display. We didn't have time for their boneyard tour but did spend a few hours wandering around the aircraft they had on display. 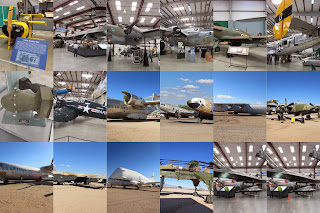 There are still lots of things we want to see in the area and we have a few more days to do that but we for sure won't finish our list.

We spent a number of frustrating hours trying to get our new dish receiver set up. After countless futile attempts we called Dish and were told if we didn't have a house we would have to take it back to Camping World to get the program to load. Seems with this model (VP211z) you can't do the set up from an rv, and this is an updated model of the one we previously bought. We did finally get the program loaded at Camping World and the local store here learned this too. Last night for the first time since leaving VT I enjoyed a few hours of tv time that I wanted to watch, life is good. :)

We've also enjoyed numerous beautiful sunsets and walks in the desert, we were in Tucson a few years back and visited Saguaro National Park and the Arizona-Sonora Desert Museum so don't know if we'll get back to those this time. 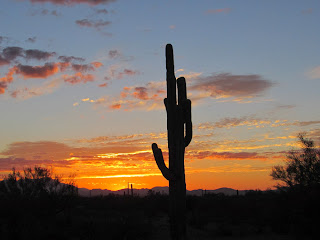 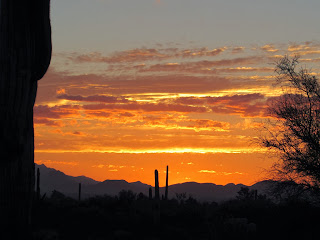 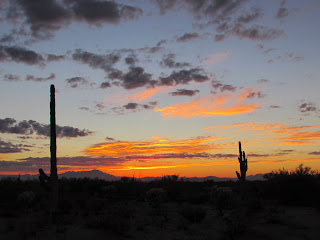